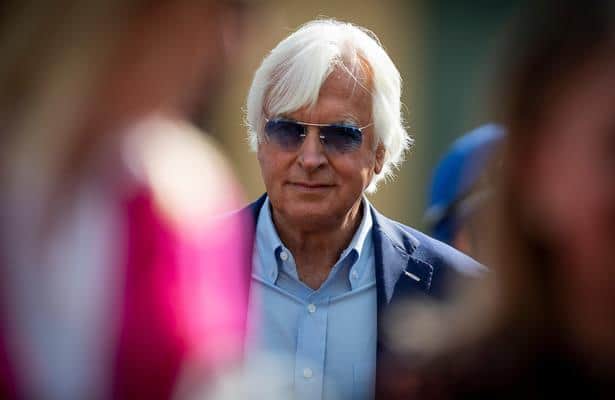 Hall of Fame trainer Bob Baffert will try to win the Los Alamitos Derby for a fourth consecutive year when he sends out Thousand Words and Uncle Chuck Saturday.

The Grade 3, $150,000-guaranteed Derby, which is for 3-year-olds at 1 1/8 miles, is part of a stakes doubleheader on the next-to-last day of the Summer Thoroughbred Festival. Bellafina, a seven-time graded stakes winner, tops the field of older fillies and mares in the Grade II, $200,000-guaranteed Great Lady M at 6 ½ furlongs. Post time Saturday is 1 p.m.

The Los Alamitos Derby will go as race six and has a scheduled post time of 3:28 p.m. PDT while the Great Lady M. will be the eighth of nine races and is scheduled for 4:28 p.m.

Baffert, whose Los Alamitos Derby win streak commenced with eventual 3-year-old champion West Coast in 2017 then continued with Once On Whiskey (2018) and Game Winner a year ago, will be seeking his fifth win in the contest since daytime thoroughbred racing returned to Los Alamitos in 2014. He also won with Gimme Da Lute in 2015.

With the postponement of the Kentucky Derby from May 2  due to the Covid-19 pandemic, the Los Alamitos Derby is part of the “Road to the Kentucky Derby’’ this year. The winner of the local Derby will receive 20 points towards earning a berth in the starting gate the first Saturday of September. The runner-up will receive eight points, the third place finisher four and the fourth place finisher two.

Owned by Albaugh Family Stables LLC and Spendthrift Farm LLC, Thousand Words hasn’t been out since finishing far back over a sloppy track as the 5-2 favorite in the Oaklawn Stakes April 11 in Arkansas. He’s won three of five and earned $235,500.

An Uncle Mo colt out of the Unbridled’s Song mare Forest Music, Uncle Chuck was an impressive first out winner June 12. He went gate-to-wire against four opponents in the race at one mile, cruising to a seven length victory for owners Mike Pegram, Karl Watson and Paul Weitman. The win was worth $30,000 for Uncle Chuck, a $250,000 purchase at the Keeneland September sale in 2018.

Defeated a neck by Thousand Words in the Grade 2 Los Alamitos Futurity in his final start as a 2-year-old, Anneau d’Or will be seeking his first win of 2020 for Peter Redekop B.C. Ltd. and trainer Blaine Wright.

The Medaglia d’Oro colt out of the Tapit mare Walk Close was most recently fourth in the Grade I Santa Anita Derby June 6, finishing nearly six lengths behind winner Honor A.P.

Great Power will race for the first time since finishing a distant third behind Charlatan at one mile March 14.

Trained by Simon Callaghan for JSM Equine LLC, Qatar Racing Limited and breeder Lakland Farm, the Blame colt out of the Unbridled’s Song mare Lifeinthefastlane was a first out winner going short last Sept. 29. He earned $36,840 in his two starts.

A five-start maiden, Cosmo will make his first afternoon appearance on a surface other than turf for Hall of Fame trainer Neil Drysdale.

Owned by Edward Hudson, Jr. and Lynne Hudson, the Distorted Humor colt out of the Grand Slam mare Sky Glow has banked $18,500 while hitting the board twice. In his most recent start at one mile, Cosmo was third, three-quarters of a length behind favored winner Tiberius Mercurius June 19.