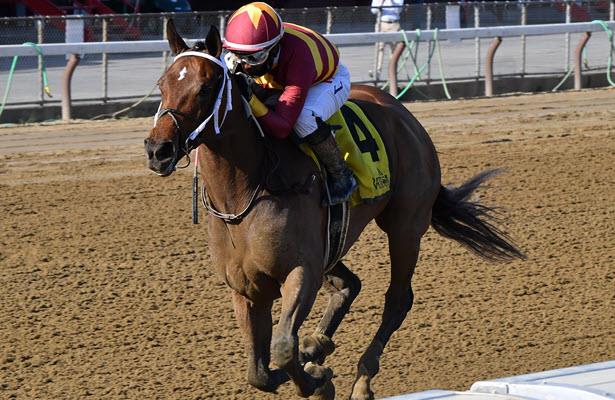 Steve Assussen might have found his next juvenile star, as Thoughtfully rolled to an open lengths victory in the Grade 2, $200,000 Adirondack for 2-year-old fillies going 6 1/2 furlongs at Saratoga on Wednesday. The daughter of Tapit, ridden by Ricardo Santana Jr., remains perfect in two starts with the stakes win. Thoughtfully beat maidens on debut at Churchill Downs going 5 1/2 furlongs in June. “She was really good,” Santana said from the winner's circle. “I was just waiting for her, the hole opened up and go from there. She totally classed out today.” The win gives Asmussen his third victory in the Adirondack, and his first since 2015, when he won with Just Wicked. Ava’s Grace and Make Mischief led for most of the race, but were unable to fight off Thoughtfully, who stalked in third place, then made a run up the outside in the final furlong to win by about two lengths.

"It's her second time out and I didn't want to put her on the lead," Santana Jr. said. "We were sitting behind the speed and she was feeling happy and comfortable where she was. I was really happy with her, too, and I was just waiting for the hole to open, and she gave me a really good kick.

#4 Thoughtfully (1/1) blows ‘em away in the Adirondack (G2) at Saratoga under @RSantana_Jr. The precocious Tapit filly is now 2-for-2 for Trainer Steve Asmussen pic.twitter.com/in8DyBHxKO


Thoughtfully returned $4 for the victory. Out of the Seeking the Gold mare Pension, she is owned by Heider Family Stables, who purchased the filly at the Fasig-Tipton New York Saratoga select yearling sale in August of 2019 for $950,000.
"She's a super nice, classy filly," Santana Jr. said. "Today, going 6 ½ [furlongs], I thought to take my time with her. It's her second time out, and we wanted to teach her something. She responded really well. She has a lot of class."

According to Equibase, Heider Family Stables has been in operation since 2012 and Thoughtfully is its first stakes winner.