'This is why you work hard'; Castellano nabs Gulfstream stakes double 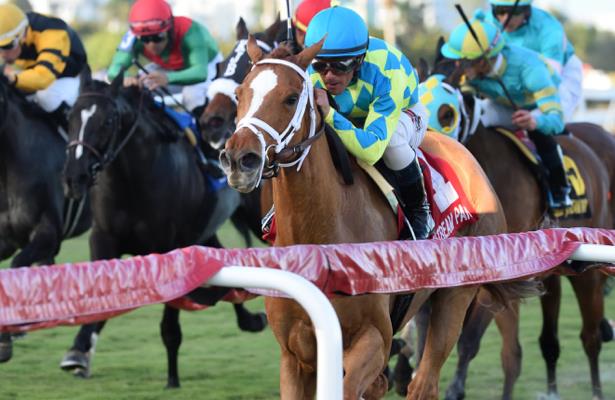 Bortolazzo Stable’s Bellavais, already a multiple stakes winner, shot through an opening along the inside in mid-stretch and sprinted clear for her first career graded-stakes triumph in Saturday’s Grade 3, $150,000 Marshua’s River at Gulfstream Park.

Bellevais’ victory gave Hall of Fame jockey Javier Castellano – the Championship Meet’s leading rider from 2012-2016 – a sweep of the two stakes, having upset favored Heart to Heart in the Tropical Turf with Doctor Mounty. The winning time was 1:41.98 over a firm course.

“This is why you work hard, to have a day like this. Everything was good today,” Castellano said. “Before the race, I thought the horse might be better on the outside but the hole opened. Those kinds of things you just have to use your best judgement, and it worked out perfect.”

It was the third win in four years in the Marshua’s River for both Castellano and trainer Todd Pletcher, who swept back-to-back editions of the race in 2016 and 2017. Pletcher has won an unprecedented 15 consecutive Championship Meet training titles.

“I loved the way she was training coming into the race,” Pletcher said. “She drew the rail and Javier’s plan was to try to save ground and maybe tip out at some point, but a hole opened up and she shot through it like a star.”

I’m Betty G was in front through a quarter-mile in 24.07 seconds and a half in 48.34, pressed to her outside by Grade 3 winner La Signare, a narrow 2-1 favorite, with Valedictorian and Bellevais close behind in a battle for third. I’m Betty G maintained her advantage after six furlongs in 1:12.04, leading a tightly bunched group into the stretch until Castellano found daylight and gave Bellavais her cue, and they drew off to win by 3 ½ lengths.

I’m Betty G held on for second, a head in front of Valedictorian. Bombshell got up for fourth at 10-1, followed by 45-1 long shot Hogans Holiday, La Signare, Rose Tree and Monte Crista.

“I had a perfect trip, dream trip,” Castellano said. “Unfortunately, I had a little trouble with her last time and tried to split horses and cut the corner and it was tight. I tried to anticipate and it cost me the race. Today, I thought the extra distance was going to help her a little bit. It worked out great. There was a lot of speed in the race. It folded and I was saving all the ground.”

Bellavais was fourth in the one-mile My Charmer (G3) Dec. 15 at Gulfstream, a race where she tracked the leaders but encountered trouble in the stretch and made contact with the rail yet still was beaten only 3 ¼ lengths.

“Unfortunately it rained that day and she had just come off running a mile in 1:33 at Belmont on firm ground, and I think they ran a mile in 1:39 that day to give you an idea how soft the inside course was,” Pletcher said. “Plus, she got in a little trouble last time and got bounced off the rail and that didn’t help. I still think she’s classy enough that she’ll try on any ground, but she prefers it firm.”