These were the weekend's fastest stakes winners 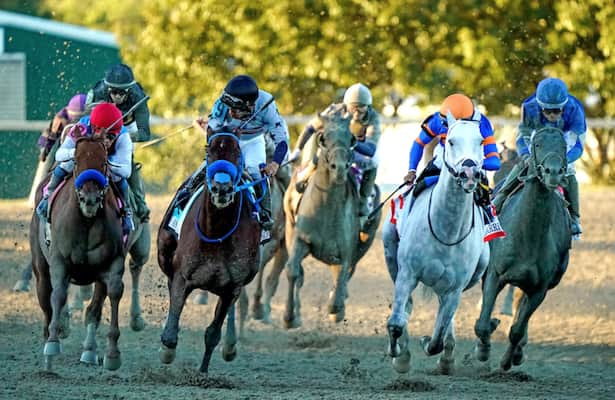 Taiba proved that he's a runner to be reckoned with in his three-length win over Zandon in Saturday's Grade 1 Pennsylvania Derby.

And for that effort, he earned the highest speed figures among the weekend's stakes winners.

With Mike Smith aboard, Bob Baffert's Gun Runner colt covered the 1 1/8 miles in 1:48.67. Taiba earned a 113 Brisnet Speed Rating, a 108 Beyer Speed Figure and a 131 TimeformUS Speed Figure. Zandon, by the way, got a 103 Beyer for his runner-up effort, according to Daily Racing Form.

Mind Control, winner of the Parx Dirt Mile by disqualification, had the next-highest Brisnet rating, at 111. Kimari was second on the Beyer list, at 106, for her win in the Gallant Bloom (G2). And Society was runner up on the TimeformUS list, with a 124 for her 5 3/4-length win in the Cotillion (G1).

Here are the figures for the weekend's stakes winners, with the highest Brisnet Speed Ratings, Beyer Speed Figures from DRF and TimeformUS Speed Figures, where available.