These were the HRN stories you read the most in 2020 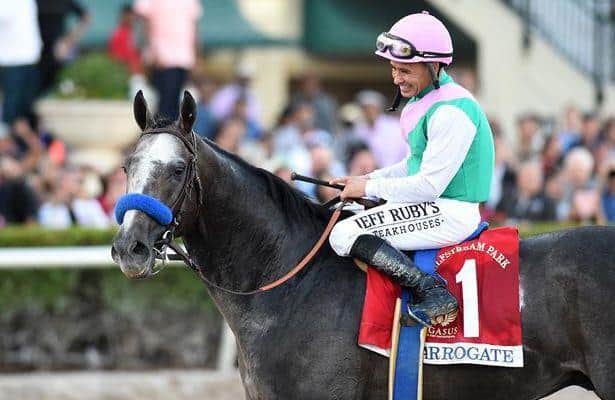 As the year comes to an end, we took a look back at the stories that Horse Racing Nation readers viewed the most during the year.

Stories concerning the FBI’s doping indictments made a few appearances in the top 10, as did the findings of banned substances in Bob Baffert’s Charlatan and Gamine. And two of the top 10 stories show that great horses have a special place in our readers’ hearts.

Along those lines, the news story that had the most page views this year was: ‘Heartbreak’ as champion Arrogate dies at age 7. The champion Three-Year-Old Male of 2016 and record-breaking Travers Stakes (G1) winner was euthanized in June after an illness. Arrogate won the 2016 Travers, his stakes debut, in 1:59.36, the fastest 1 1/4 miles ever run at Saratoga. He followed that up by defeating eventual Horse of the Year California Chrome in the Breeders’ Cup Classic, with a memorable stretch battle at Santa Anita Park.

When news broke March 9 about the FBI investigation of illegal drugging of racehorses, HRN was the go-to source for the latest news, as another of our top stories was: Servis, Navarro among 27 indicted in doping ‘scheme’. Trainers Jason Servis and Jorge Navarro were among 27 in the racing industry who were indicted on charges of illegally doping racehorses and, with the FBI saying they "routinely defrauded and misled government agencies" along with "the betting public."

In another sign of the strong interest in the topic, another top-10 story for the year was this follow-up report March 9: Indictment: Servis covered up Maximum Security’s PED use. This story outlined allegations of how Servis and Navarro were accused of discussing the use of an illegal substance, SGF-1000, in phone calls, and how Servis allegedly tried to hide the use of performance-enhancing drugs.

Of course, there was plenty of interest in Servis's star horse before the indictments, and Maximum Security beats world’s best in $20 million Saudi Cup was another top story (though it just missed the top 10). The colt overcame Mucho Gusto in the stretch and held off a late-charging Midnight Bisou in a race that, at the time, had no controversy — unlike Maximum Security’s Kentucky Derby win the year before. That would not last.

The day after the race, we reported jockeys Smith, Ortiz fined and suspended for Saudi Cup rides. Mike Smith, fourth on Mucho Gusto and Irad Ortiz Jr. (second aboard Midnight Bisou) were given suspensions and fines on a sliding scale for excessive use of their crops in the homestretch.

One of many questions to arise out of the Maximum Security debacle was who would take over training of the former champion 3-year-old. We answered that on March 10 in another top 10 story: Baffert to train Maximum Security in wake of Servis' indictments. Owners Gary and Mary West announced that all of their horses that had been by Servis would be transferred to other trainers.

The polarizing Baffert was at the center of other top 10 stories this year. As word drifted out that two samples producing positive tests for a banned substance on Arkansas Derby day would be sent for confirmation by an independent lab. HRN provided updates on the developing story, including this top 10 story: Report says Arkansas Derby's Charlatan tests positive. Of course, eventually the findings were that Charlatan, winner of a division of the Arkansas Derby, and Gamine, who raced on the undercard, both tested positive. That led to another top 10 story.

Baffert suspended 15 days; Charlatan, Gamine DQ’d. Both horses test positive for lidocaine, a legal but restricted numbing agent. Baffert contended that the trace amounts came from a pain-relief patch containing lidocaine worn on by assistant trainer Jimmy Barnes, who was recovering from a broken pelvis. They said the drug had been transferred from Barnes’s hands to the horses when tongue ties were applied. Baffert appealed the suspension.

And while on the topic of the Arkansas Derby, another top-10 story was this report: With 12 entries, Arkansas Derby to split divisions. In a most unusual year, the Kentucky Derby was not held on the first Saturday in May, but the Arkansas Derby was. And it attracted just enough entries to be split into two divisions. Baffert’s Nadal was safely in the field, and the split allowed him to also enter Charlatan and, well, see above.

The coronavirus pandemic affected more than the racing calendar this year, as attested by this top 10 story: Jockey Castellano positive for COVID-19, to isolate. He was the first big-name American jockey to be identified as testing positive, and it happened at a time — late March — when nobody know where this was going to go. Castellano, who was asymptomatic, quarantined.

Amid all this controversy and COVID, let’s wrap this up with a top-10 story that was much more cheerful: Zenyatta delivers her latest foal and she’s ‘just beautiful’. We reported in May that a chestnut filly by Candy Ride was foaled at Lane's End Farm in Kentucky by the multiple Eclipse winner and only female winner of the Breeders’ Cup Classic.