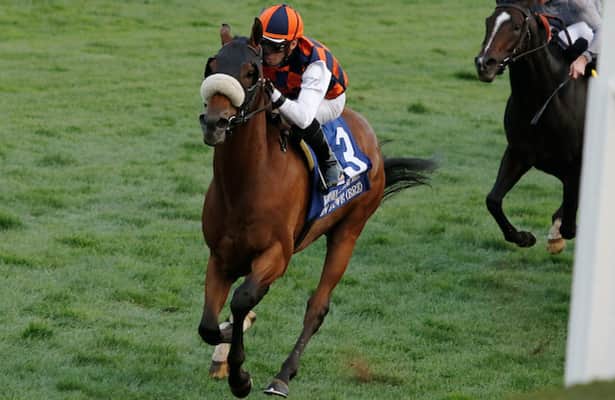 It was a hectic weekend of Breeders' Cup races, but it was not a banner weekend for speed figures.

Five horses made the Daily Racing Form Beyer Speed Figure leaderboard, but the highest figure earned was a 103.

Here is a rundown of the five top Beyer performances:

WATCH ? the replay of In Love's victory in the #Keeneland Turf Mile (G1) to wrap the Fall Stars Saturday stakes action! pic.twitter.com/9PMstl3dAR

Rockemperor, 103. The 5-year-old Chad Brown trainee won the Joe Hirsch Turf Classic (G1) at Belmont Saturday for his first graded-stakes victory and only his fourth overall in 20 starts.

Blowout, 102. Also trained by Brown, he led wire to wire in the First Lady (G1) at Keeneland on Saturday. The 5-year-old mare has finished in the money in each of her 14 starts – except for her fourth-place finish last out in the Fourstardave (G1).

Regal Glory, 102. The 5-year-old mare's effort also came in the First Lady, where she finished second to give Brown the exacta.