These runners have the highest speed figures in January 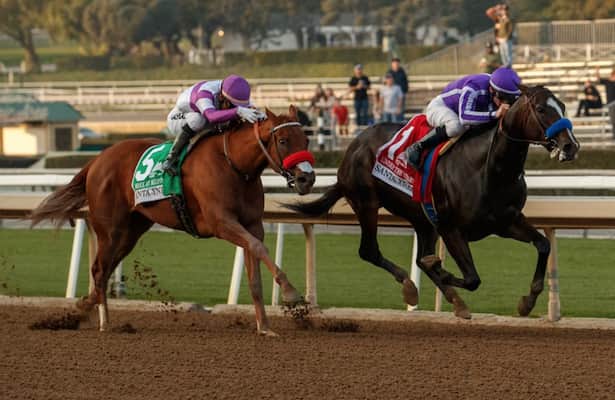 With two racing weekends in the books, the fastest runner so far this year is one you might have missed.

Sir Alfred James, a 6-year-old gelded son of Munnings, earned a 103 Beyer Speed Figure on New Year's Day in the black-type Holiday Cheer Stakes at Turfway Park, according to the Daily Racing Form. Trained by Norman Cash, he covered the six furlongs in 1:08.53 to win by 6 1/4 lengths. It was the only performance to earn a triple-digit Beyer so far this year.

One horse has earned an 98 Beyer this year: Strong Tide for his 2 3/4-length win in an allowance optional claiming race at Oaklawn Park on Sunday. The 5-year-old son of English Channel set a track record by going 1 1/16 miles in 1:56.33.

Among new 3-year-olds, the highest Beyers so far, 92, went to two runners at Santa Anita over the weekend: Adare Manor, a filly who broke her maiden by going one mile in 1:36.66 to win by 12 lengths on Friday, and Under the Stars, another filly and the winner of Saturday's Santa Ynez (G2), covering the seven furlongs in 1:22.51. She also earned a 98 Brisnet Speed Rating for her effort.

Under The Stars As Time Goes By Adare Manor

» Horse: Under The Stars
» Horse: As Time Goes By