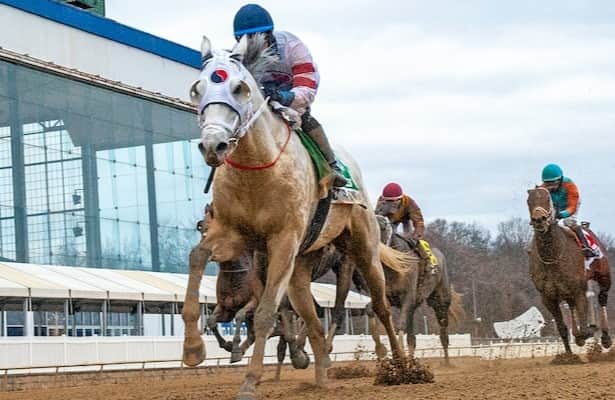 Last weekend racing calendar wasn't very busy, but you might have overlooked Factor It In's win in the black-type Fire Plug Stakes at Laurel Park on Saturday.

The now 7-year-old son of The Factor had finished third in the Bold Ruler (G3) and Fall Highweight Handicap (G3) at Aqueduct before shifting to Laurel Park, where the Fire Plug was his second stakes win in a row.

Trained by Carlos Mancilla and ridden by Angel Cruz, Factor It In covered the 6 1/2 furlongs in 1:18.01 as the odds-on favorite, earning a 102 Brisnet Speed Rating, the highest among the weekend's stakes winners. He also got a 94 Beyer Speed Figure, according to Daily Racing Form.

The highest Beyer of the weekend, a 99, went to Gentle Soul for his win in the listed Colonel E. R. Bradley Stakes at Fair Grounds. Trained by Bret Calhoun and ridden by Reylu Gutierrez, the 6-year-old son of Tapizar went 1 1/16 miles on turf in 1:48.82 to win by a half-length over Two Emmys.

In the lone points prep for the Kentucky Derby, Instant Coffee got a 96 Brisnet rating and 92 Beyer for his win in the Lecomte (G3). And in the Silverbulletday, a Kentucky Oaks (G1) points prep, The Alys Look got a 93 Brisnet and 89 Beyer.