These 25 horses had the week's highest speed figures 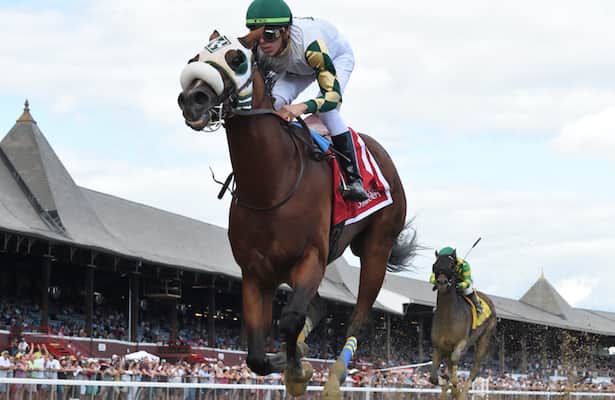 Isolate picked up his third victory from four starts this year when he  Wednesday's Tale of the Cat at Saratoga by six lengths.

He also got the highest Brisnet Speed Rating of the week – 104.

With Tyler Gaffalione riding, the Tom Amoss trainee covered seven furlongs in 1:23.04, which was good for a 120 TimeformUS Speed Figure.

The biggest buzz generators of the weekend, though, were impressive first- and second-out performances. The 3 3/4-length win by 2-year-old Damon's Mound in the Saratoga Special (G2) earned him a 93 from Brisnet, an 86 Beyer Speed Figure from Daily Racing Form, and a 105 from TimeformUS.

Todd Pletcher's Expressman, a 3-year-old, debuted in a Saratoga maiden special weight and won by 7 1/4 lengths, picking up even more impressive figures: 105 Brisnet, 107 Beyer and 123 TimeformUS.

Similar numbers went to Bob Baffert's Cave Rock, a 2-year-old who won by six lengths in his debut at Del Mar. He earned a 104 Brisnet and a 101 Beyer.

Here are the horses with the top 25 Brisnet Speed Ratings for the latest week, with Beyer Speed Figures and TimeformUS Speed Figure where available.