Horse racing and coronavirus pandemic: 'The show goes on' 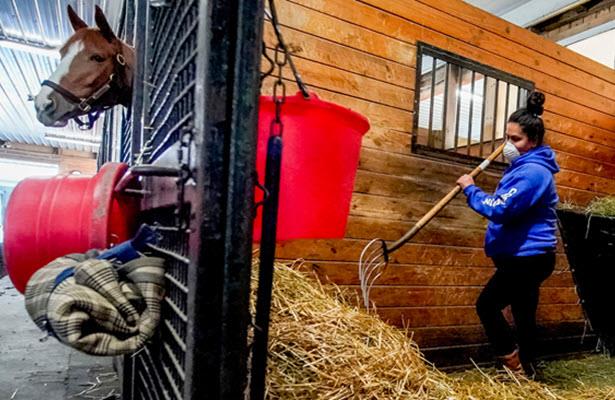 As the racing industry grapples with the effects of the coronavirus pandemic, those still allowed to access tracks and training centers -- horsemen themselves -- have provided a glimpse into their new normal.

Trainer Graham Motion had an upbeat attitude in a video shared Thursday by America's Best Racing.

Speaking from Maryland's Fair Hill training center, Motion said that, as with most people, his team is avoiding working in groups, washing their hands and practicing other recommended sanitary standards.

"But the horses have to be taken care of ... people have to come back and handle that," he said. "They need to be trained. Horses have to get out of their stalls and exercise."

Motion is grateful that jockeys and track personnel are working to keep racing going.

"We're trying to do the best we can under what's extremely awkward and uncomfortable circumstances -- something that we've never dealt with before," Motion said. "But the show goes on, and we're taking care of the horses as best we can. They're all very happy and very unaware of the situation themselves."

He won the 2011 @KentuckyDerby with Animal Kingdom

He's a world-class Horse Trainer with multiple @BreedersCup wins, a gentleman, and a kind soul@ABRLive checked in with @GrahamMotion during #COVID19

From a rider's perspective, jockey Sophie Doyle summed up the situation with one word: uncertainty. And she has a lot of questions.

???? @sophiedoyle77 explains how the American horse racing industry has been affected by #Coronavirus. pic.twitter.com/kYhyJm6yDM

Trainer Mark Casse, a finalist this year for racing's Hall of Fame, reflected on racetracks' willingness to go on amid the pandemic, saying that while every industry will be his economically, this one can lessen the blow.

Casse said that, in particular, he'd been asked about the prospects of racing at Woodbine in Canada, where he is the perennial leading trainer. The meet is scheduled to start April 18.

"And I said, hopefully so because they haven’t had racing now for four or five months because they’re obviously off for the winter time," Casse said. "These people that own these horses, train them, take care of them, they’re probably getting very low on their – with their income and their money and I don’t know if they can survive if they don’t race.

"So it’s important. It’s important to get racing going as fast as we can. If that means no fans, then we can live with that for now."