With 'The General,' owner's biggest impact came off the track 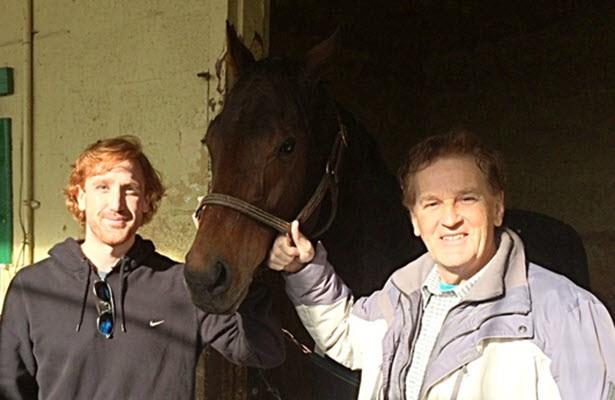 The track was Aqueduct. William “Bill” Couton was in attendance with some of his family, watching his horse Chelios in a claiming race. When the gelding crossed the line, winning by “daylight,” according to Couton’s nephew and longtime assistant trainer for Gary Contessa, John Diaz, the celebration began.

“I’ve bawled twice,” Diaz said. “At the Kentucky Derby and on like a Wednesday at Aqueduct running a 16-claimer. I cried like a baby.”

Diaz wasn’t crying for the love of the horse. It was a culmination of a lifetime of horse racing memories for Couton, co-owner of Linette Stables, who had recently begun the fight with cancer that recently cost him his life at the age of 73.

“It was for my uncle Bill,” Diaz said. “It was his first win, his first horse. We’re bawling in the paddock like we won a win-and-you’re-in for the Breeders Cup. It was just special because of how special he was to me growing up."

In those days, Couton, one of nine siblings, and his family rode from the Upper East Side to Aqueduct to bet on the races. His favorite horse was Silky Sullivan, the legendary deep closer. Once he learned a lesson about risking everything.

“What we always said is ‘save two bucks for the bus ride back home,’” Gordon Couton, Bill’s younger brother said. “Unless somebody got lucky and hit, then you stayed. But my brother, nope, he didn’t save his bus fare that day. He went out to Aqueduct and he walked back.”

According to Google Maps, that’s more than a three-hour walk.

Bill Couton was described as “the General,” of his neighborhood group of friends. Sometimes his ambitions led them to the tracks, such as the time Bill, a huge Beatles fan who attended the group’s legendary concert at Shea Stadium, tried to start his own band.

“He collected money from us at our jobs to buy instruments for the band,” Gordon Couton said. “That never materialized, because Will had a better idea. He said ‘let’s take all this money and go to Yonkers Raceway.’ We all figured, that’s a good idea. That money lasted about two or three nights. The band was disbanded.”

For Diaz, uncles Bill and Gordon were more like big brothers who kept him out of bad situations when he came to live with them. Diaz credits them with keeping him from the same fate of many of his friends from childhood, who have ended up dead or in prison.

“Maybe I didn’t want to come in at 7 or 8,” Diaz said. “But they would come down and grab me by the ear and pull me inside… He was always finding something to do to keep us out of trouble.”

Bill had other sports interests as well. Despite having never played college football, after playing in a Wall Street league as a wide receiver, he earned a tryout with the Westchester Bulls, a farm team for the New York Giants. He also was a New York Rangers season ticket holder, frequently attending games during the 1990s, when the team was the class of the National Hockey League.

Bill and his family attended the Belmont Stakes almost every year, despite it often turning out the opposite of his hopes.

“Had our hearts broken a million times,” Graig Couton, Bill’s son, said. “Smarty Jones, Big Brown, you know the list goes on and on. All these near-Triple Crown horses, they had those near misses.”

Graig Couton, who co-owns and manages Linette Stables, said that Bill, who he described as a dedicated family man, taking him to those Belmonts sparked a lifelong love of horse racing for him.

“That kind of lit the fire,” Graig Couton said. “I was addicted you know, back in the late 90s watching those three near misses in a row… he got me into it.”

Besides horse racing, Bill Couton loved traveling with his wife Linda, though he found ways to get to the tracks, looking forward to his yearly trip to Gulfstream Park for the Fountain of Youth.

Linette Stables plans on donating some portion of future winnings to charity in honor of Bill Couton.

“We didn’t have a lot,” Diaz said. “But we never wanted with those guys around. He was a very important person in my life. I don’t think there’s anybody else in my family that I would have [encouraged to become an owner,] because you don’t want them to lose. But he never lost a dime. We didn’t make a million dollars, but we won races.”