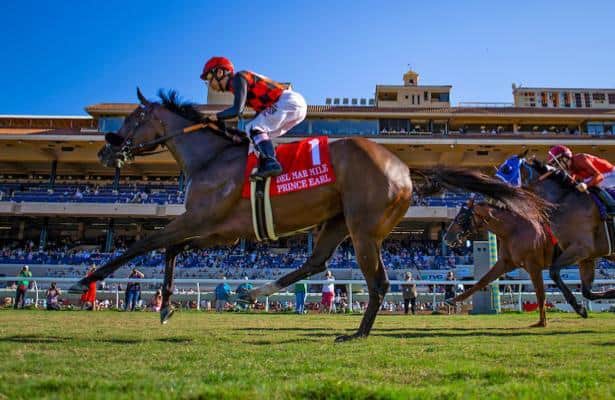 Photo: Eclipse Sportswire
Horse Racing Nation is highlighting readers’ best betting days at the races -- how they chased the big score and cashed in -- with this new weekly feature. Let us know about your big hit here.

While there’s no shame in chasing a hefty payout by going deep in most legs of a multi-race wager, Kane Duck’s $36 ticket wagered back on Aug. 18 at Del Mar proves it’s not the only way to a big hit.

Duck, who has played the ponies for as long as he can remember, will be thinking about that afternoon for a long time having hit for $155,723 -- an amount so much, for such little investment, that taxes cut the payoff to $118,358.

The closest Duck had come previously to a big hit was when he just missed out on an $87,000 Pick 6, on a day he still cashed the Pick 5 for a respectable $1,800. There was no consolation, however, needed back in August after years of chasing such a score.

“My dad brought me to the track. My grandparents were big track lovers. I kind of grew up around the track,” Duck said. “We’d go to Los Alamitos here (in southern California). We traveled to Del Mar on the weekends. It’s how I got a love of the game.”

His Pick 5 ticket, which started in Race 5 of nine at Del Mar, went three deep in the first leg. He used as many as three horses only one other time in the sequence; the other races had two on his ticket.

“The first leg was a weird off-beat waiver race,” Duck said. “That was the least confident I was in all of the races. I put in three horses in the first leg -- two longshots and the horse that eventually won the race, Twirling Tiger.”

Twirling Tiger, a 7-2 shot in the win pool, won the seven-furlong sprint by ¾ of a length over Forever Juanito, a horse Duck did not have on his ticket.

“I figured Twirling Tiger would sit off the two frontrunners and make a move around the turn and he did exactly that,” Duck said. “That was the most scared I was during that Pick 5.”

Race 6 was a maiden special weight event for California-breds going 5 ½ furlongs. Duck’s top choice was a first-time starter boasting some of his favorite connections.

“I’m a big Victor Espinoza fan when he’s on young horses,” Duck said. “He was on the No. 2 horse, It’s Fitting. He was 16 or 17-1 and it was for (trainer) James Cassidy as well -- and I’m also a big fan of the old-school trainers like him and John Shirreffs.

“I saw the combo of Espinoza and Cassidy. I thought that was a good horse (to use).”

While Duck was pleased to get past the first two legs of the sequence, he knew he’d need some luck to get to the last two legs. He rarely plays low-priced horses early in Pick 5 wagers.

“I have a theory on Pick 5s,” he said. “It’s if you get past the first leg, I don’t put many favorites after that until the fourth or last leg. Because at that point you’re playing with house money.”

The plan didn’t exactly pan out when one of Duck’s selections, Bowies Hero, went off as the favorite in Race 7, the Del Mar Mile Handicap (G2). His other horses were the fourth choice in the win pool, What a View, and fifth choice Prince Earl.

Prince Earl was the horse in which Duck had the most confidence.

“Giovanni Franco was riding him, and he’s been on fire in California this year, especially with late runners,” Duck said. “That race had a lot of pace in it; Sharp Samurai was in there. I’m looking for the other horse I had in the race and all of a sudden I see Franco get on the inside and flew right up the rail past Sharp Samurai.”

Franco and Prince Earl got the job done to the tune of 9-1.

“Prince Earl was a consistent young horse and I felt he would get better,” Duck said. “Once I got past that third leg I kind of knew I had a chance, because I felt really good about the last two horses I had in the last two races.”

Continuing his way to a handsome payout was a matter of Duck identifying a rising star who has gone on to become a multiple stakes winner. Midcourt is a Shirreffs trainee who had Espinoza aboard -- more of those favorite connections -- in an allowance optional claiming race at 1 1/16 miles.

In this spot, Duck had a favorite he wanted to beat and Midcourt at 14-1 on the board.

“In that race, the heavy favorite (Magic on Tap) was an extreme frontrunner and he got squared up early and ran a super fast pace,” Duck said. “Midcourt was about six lengths in back of fifth, second to last or last. On the turn, I saw Espinoza picking start picking up and I saw the favorite start to slow down. At about halfway through the stretch I knew he had it. He started coming like a train.”

Going into the final race of the sequence, Duck had already banked two $30 winners, another above $20, and opened the sequence with a third choice in the wagering. He knew the potential was juicy, but wasn’t prepared for what he saw in the will pays.

“At first I saw the (No. 2) She’s Our Charm will pay because that was the horse I really liked on the front end,” he said. “I heard one of the TVG announcers say the other will pay (on the other horse he had, No. 12 Catch the Eye) was one of the biggest Pick 5 will pays he’s ever seen. So, naturally, I had to take a look at it, and I thought if that it’s unreal.”

The hope for She’s Our Charm was a race with little pace, a rider, Diego Sanchez, who Duck feel is “a good young speed jockey” and some wise words from the Daily Racing Form’s Brad Free, who echoed those thoughts.

“The whole race she was leading,” Duck said, “and about halfway through the stretch, the favorite came up on the outside and I was thinking to myself, ‘Hang on! Hang on!”

And hang on She’s Our Charm did, winning by a neck over 50-1 shot Haughty Girl, who with a victory may have triggered a carryover. As it turns out, Duck had one of either four or five winning Pick 5 tickets.

Of a big hit with a small play, Duck added, “It’s some skill, and it’s some luck, but sometimes it’s just in the stars.”