The Thriving Legacy Of Secretariat 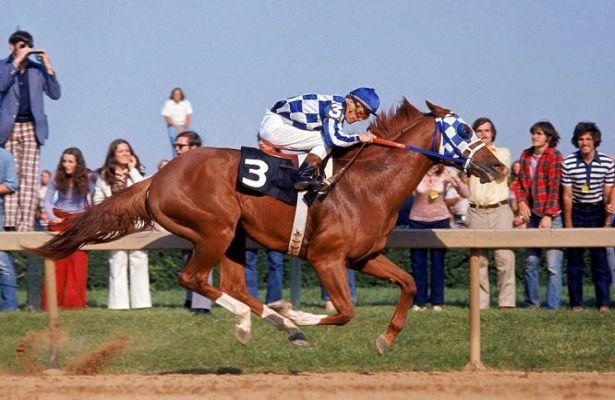 On October 4th, 1989 the heavens gained a bright new star.  Secretariat passed away after 19 extraordinary years of life.  Few horses in the history of racing have left behind the kind of legacy that 'Big Red' did.  Secretariat had fought a valiant battle with laminitis for a month, but despite all efforts, he could not be saved.  Penny Chenery, the owner of Secretariat, made the decision to end his suffering.  Surrounded by many of those who loved him, Secretariat slipped away from this mortal plane, and joined the pantheon of horse racing greats.  His story was far from over, however.  His descendants have carried on his legacy and have proven the lasting greatness of his bloodline.

One of his most notable descendants was the great racing filly, Lady's Secret.  She was one of Secretariat's most successful progeny.  Lady's Secret was known as the "Iron Lady" for her fierce, competitive spirit.  She was diminutive and weighed barely 900 pounds, yet was a force to be reckoned with.  Lady's Secret became Horse Of The Year in 1986, and went on to become a noted broodmare.  She gave birth to 13 foals by the most sought after sires of the day.  Lady's Secret died unexpectedly from complications after giving birth to her 13th foal in 2003, but her place as one of racing's greats is forever secure.

One of Secretariat's sons, General Assembly, set the track record for the the Travers Stakes in 1979.  It was a record that held for 37 years until being broken in a stunning performance at the Travers by Arrogate in 2016.  If you study  the pedigree of many of the top horses in racing today, you are most likely to see Secretariat in their bloodline.  There is a rare combination of speed and stamina in the Secretariat bloodline.  The speed was inherited from his sire, Bold Ruler.  The Stamina was inherited from the side of his dam, Somethingroyal.  That, along with a rare condition that gave Secretariat an enlarged heart for increased blood flow, created a rare genetic anomoly of perfect physicality, speed, and stamina.

Secretariat passed on many of those traits to his progeny.  His descendants still bear those hallmarks of greatness.  The legacy of Secretariat will continue for generations to come.  He was once called, "The horse that God built".  He was a near perfect specimin, who quite literally defied the physics of racing.  His 31 length margin of victory at the Belmont Stakes in 1973 is a testament to that fact.  His record time and margin of victory have never been equaled.  No horse since has come close.  It is a record that most likely will never fall.

From the time that Secretariat won the Triple Crown in such spectacular fashion in 1973, every horse since has been held to his standard.  It is a standard that is virtually impossible to achieve.  We have entered another great era of racing with American Pharoah winning the Triple Crown after a 37 year gap in 2015.  He became the only horse in history to win the Grand Slam of racing by winning both the Triple Crown and Breeders Cup.  It is no surprise to find Secretariat in the bloodline of American Pharoah.  The first crop of foals by American Pharoah are due in Spring of 2017.  It will be very interesting to see these young foals grow, and watch how they carry on the legacy of Secretariat.  He has been gone for over a quarter of a century, but his legacy is alive and thriving.