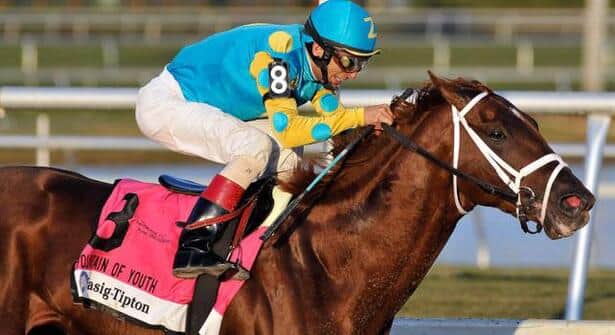 One day shy of his true third birthday, Eskendereya dominated the Fountain of Youth Stakes (G-2) by the same winning margin as Spectacular Bid’s 8 ½ length win in 1979. Saturday, Eskendereya emulated his damsire Seattle Slew, winning in the comparable time of 1:49.4/5.  While Seattle Slew won by a comfortable 2 ½ lengths, his grandson dazzled the field galloping under the wire by 9 ¾ lengths.

Eskendereya (Giant's Causeway - Aldebaran Light, by Seattle Slew) sold for $250,000 at the 2008 Keeneland September Yearling sale to Zayat Stables.  Trained by Todd Pletcher, Eskendereya was second in his debut last September going 1 1/6 miles on the turf. A month later, he easily won the Pilgrim Stakes going a mile, over a sloppy track. In November, Eskendereya was thrown into deep waters in the the Breeders’ Cup Juvenile, where he finished ninth.  He can be forgiven the race, since not only was he shipping, trying a new distance and new surface against a large field, he was doing so with only two starts under his girth and found trouble during the race. After a two month layoff, Eskendereya won an allowance race at a mile race over the Gulfstream dirt surface then turned in spectaular performances in the Fountain of Youth and Wood Memorial. Along the way he has handily demolished the first two finishers of the Florida Derby (G-1), Ice Box and Pleasant Prince,  the Sam F. Davis Stakes and Tampa Bay Derby (G-3) runner-up Schoolyard Dreams, Holy Bull (G-3) runner-up Jackson Bend, and Gotham Stakes (G-3) winner Awesome Act.

After his two compelling victories in the Fountain of Youth and Wood Memorial, Eskendereya must be considered a legitimate Kentucky Derby favorite and his performances have vaulted him to the top of many lists. He appears to have it all, talent, conformation, pedigree and temperament. Let's delve further into his pedigree to see where this striking chestnut colt gets his talent.

Eskendereya’s sire Giant's Causeway, nicknamed “The Iron Horse” for his marvelous durability, was the Champion Three  Year Old in England and Ireland, and Horse of the Year in Europe. Although he only raced for two years, he accumulated a 13-9-4-0 race record and $3,078,989 in earnings. His only race in the U.S. became a nail-biting classic. Racing over dirt and left-handed for the first time in his life, he came within a desperate nose of winning the 2000 Breeders’ Cup Classic, handing the winner Tiznow all he could handle.  Giant’s Causeway went on to become an international sensation at stud.  He passes his durability, determination to win and ability to run over every surface to his offspring. Their exploits have made him the number one stallion standing in the U.S.  He has sired six stakes winners at the classic distance of ten furlongs, two of which include Seattle Slew on their distaff side.

Eskendereya’s dam sire Seattle Slew needs no introduction. Besides being the first and only previously undefeated Triple Crown winner, he was a prolific sire, and one of the very best of his generation.  His genes live on through a large number of his sons and daughters.  His daughters have produced fifteen offspring that have won at ten furlongs or farther.

Eskendereya is descended from one of the most successful and noted female families in history.  His dam Aldebaran Light won three of five races. Besides Eskendereya, she has produced the Group 1 winning turf sprinter Balmont (by Stravinsky). Aldebaran Light is a half sister to Blazonry, sire and winner of the 2003 Lazaro Barrera Memorial Stakes. Eskendereya's fourth dam is Queen Sucree, a Reine de Course (superior female). She is a half sister to champion  filly Tosmah and Halo, a Grade 1 winner who was a two time leading sire and produced two Kentucky Derby winners, Sunday Silence and Sunny’s Halo.  Eskendereya’s fifth dam, Cosmah was the 1974 Broodmare of the year. His sixth dam Almahmoud is the grand-dam of two major sires, the aforementioned Halo and Northern Dancer. Additionally, her daughter Bubbling Beauty produced one lesser known sire in the U.S., Arctic Tern.

While it is not considered a Rasmussen Factor breeding (inbred to a superior female within five generations), Eskendereya has breeding top and bottom to the foundation mare Almahmoud through Queen Sucree's dam Cosmah and Natalma, the dam of Northern Dancer, who is the third sire of Giant's Causeway. Also, Northern Dancer was bred to Queen Sucree, producing Eskendereya's third dam, Stellar Odyssey, giving a second inbreeding to Almahmoud.

Before his win in the Fountain of Youth, Eskendereya’s bloodline cross or "nick" of Giant's Causeway/Seattle Slew received a Grade of B from Werk Enicks, but only a D grade from Truenicks. Since his win in the Wood Memorial, the bloodline cross has been upgraded to a B+ by Enicks and receives a B from Truenicks.   Nineteen of twenty-seven Giant's Causeway/Seattle Slew foals have reached the races (70%), with ten of them (37%) winning. Two of them are stakes winners (7%) and three are stakes placed (12%).

Eskendereya is a colt with a spectacular future. He has the pedigree, conformation and racing style to be a serious 2010 Kentucky Derby contender. The buzz on the internet has him compared favorably with Kentucky Derby winners Barbaro and Big Brown.  Indeed, he has a similar approach to running and has conquered his competition with the same ease and style.