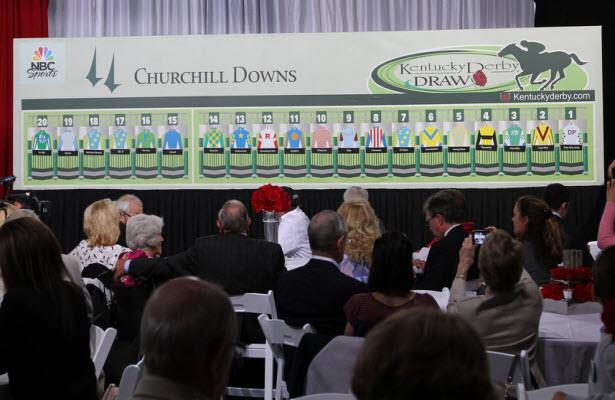 The Kentucky Derby 2020 field is coming into picture, but it is still difficult to tell if there will be a full gate of 20 runners or less than that.  At least 20 horses have entered the Derby every year since 2003.

Of those 16 intending to run, only Necker Island lacks the sufficient points to get into the field. He currently ranks 23rd, but several horses ranked above him likely will not run.


Horses expected to run in Derby (16)

In addition, the connections for 12 horses have said the Derby is still a consideration. Listed in order of Derby points, they are:

Of the 12 horses still under consideration:

• Shirl's Speight is undefeated in two starts in Canada on turf and synthetic, but trainer Roger Attfield noted that there would be concerns about shipping to the U.S.

• Storm the Court hasn't won in five starts since the Breeders' Cup Juvenile. But owner David Bernsen indicated that he's confident Storm the Court would get the Derby distance. "I have always felt since day one he is a stayer who has a long sustained run and his future may well be 1 1/2 miles on the grass, but there is one thing for sure, his getting 1 1/4 miles in the Kentucky Derby won't be an issue so that is half the battle."

• Brad Cox said that Shared Sense would not run in the Derby and be pointed to a fall campaign.

• Anneau d'Or will not run in the Derby.  "He'll go to pasture a little while," said trainer Blaine Wright.

• Trainer Bill Mott said that he hadn't spoken to the owners yet, but South Bend, who was fourth in the Travers, would likely be pointed for the Jim Dandy.

• Country Grammer was ruled out of the Derby by trainer Chad Brown.

• Rowdy Yates, who was fourth in the Ellis Park Derby, would be shipped to Remington Park and may be pointed to the Oklahoma Derby, according to owner Michael Levinson.

Below is the list of 16 horses expected to run along with Shirl's Speight, for a total of 17.