The Great One targets San Felipe after 14-length romp 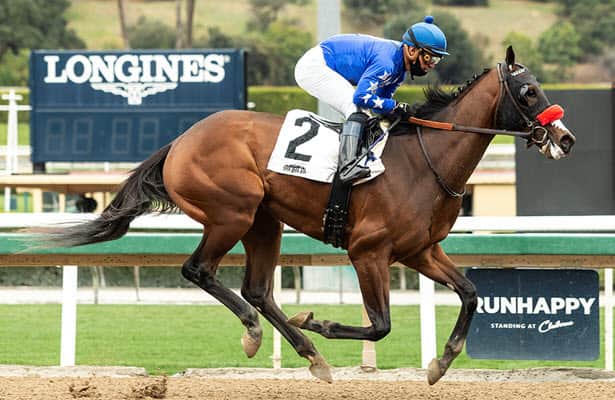 The exclamations were still relevant this morning less than 24 hours after The Great One demolished a field of maidens with a 14-length triumph in Saturday’s second race, a one-mile event that likely will lead to the Grade 2, $300,000 San Felipe Stakes at a mile and 1/16 on Mar. 6.

Doug O’Neill plans to “monitor the colt and then huddle up with the boys (owners)” before making a decision.

“Erik named him for Wayne Gretzky, one of Eric’s idols growing up,” O’Neill said, clarifying that the $185,000 Ocala Breeders’ Sales purchase was not named after the late Jackie Gleason, a multi-talented actor, comedian, writer, composer and conductor deservingly known affectionately as “The Great One.”

Gretzky, lest we forget, holds a host of hockey records that would fill a goalie’s net, and is not only considered by many the greatest hockey player of all-time, but in some quarters, the greatest athlete of all time, justifying his nickname, “The Great One.”

Gretzky, now 59, played for the Edmonton Oilers from 1978 to 1999, with his next shot on goal a high priority as he adhered to the credo, “You miss 100 percent of the shots you never take.”

Even O’Neill was surprised by the ease with which The Great One broke his maiden.

“Oh, yeah,” he said. “You never figure on winning like that. Your main focus is just trying to get him to the wire first. You never figure they’re going to win by 14, although he had been training really, really well. Each race had been better than the previous one.

» Horse: The Great One