The Factor 7-5 in Arkansas Derby 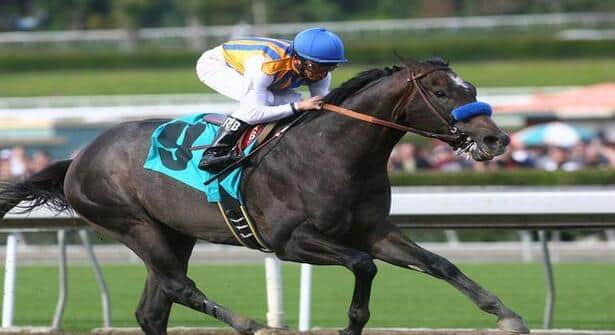 Impressive Rebel Stakes winner The Factor has been installed as the 7-5 morning line favorite in Saturday's Arkansas Derby from Oaklawn Park.

Bob Baffert's fleet colt lost his synthetic sprint debut at Hollywood Park last fall and has been flawless since. He scorched six furlongs in 1:06-4/5 in his Santa Anita maiden breaker on Dec 26 and rode the wet-fast speed bias to victory in the productive San Vicente on Feb 20. He set a fast pace and kept on going in the Rebel and he shows a pair of solid six furlongs works for this engagement. Martin Garcia rides him well and he could be long gone if left alone on the front end.

Sway Away had a bad beginning and never got involved in a puzzling Rebel clunker. He flashed ability as a juvenile and was getting to The Factor in his San Vicente return. He remained at Oaklawn Park after the Rebel and could go much better with a spin over the track and two strong works since. Jeff Bonde adds blinkers to his equipment and Garrett Gomez sticks with the rebound threat.

It is put up or shut up time for Elite Alex. The highly regarded colt won his five furlong bow at Delaware Park last summer and just missed to today's rival Alternation after blowing the break in his local allowance return Jan 15. He rallied for the show in the Southwest and got no pace help from post 12 in the Louisiana Derby. He adds blinkers and drilled a six furlong bullet from the gate on April 6. Calvin Borel strings along.

Improving colt Nehro will break from the rail for Steve Asmussen. He graduated at Oaklawn Park on Feb 21 and tracked a slow pace and just missed in the Louisiana Derby. Corey Nakatani hops aboard the late blooming son of Mineshaft.

Brethren won both of his juvenile starts and was visually impressive in his Sam Davis return. He attended a slow pace and weakened to 3rd as the heavy favorite in the Tampa Bay Derby. Super Saver's little brother adds blinkers and looms a pace factor at the very least under Ramon Dominguez.

Archarcharch earned his diploma in a Fair Grounds stakes race this winter before flopping as the strong choice in the Smarty Jones. He rebounded to post an upset in the Southwest and finished a decent 3rd in the Rebel. Jon Court sticks with the tactical threat.

The 13-horse field includes the coupled Donnie Von Hemel entry of Caleb's Posse and Alternation. The former captured the Smarty Jones in January and rallied for the place in the Rebel. The latter pitched a fit in the gate and was scratched from the Rebel.

Another horse adding blinkers is J P's Gusto. The SoCal transplant has not won since fleeing synthetic and stretching out in distance. He figures to be aggressively handled early and could be a thorn in The Factor's side.

Dance City is capable of applying pace pressure for Todd Pletcher. He fired in all three outings and showed determination when he came again to beat heavily favored stablemate Cal Nation at Gulfstream Park on March 19.

J W Blue never got seriously involved in a 5th place Rebel effort. He also dons the hood and will be running late under Joe Rocco Jr.

Truman's Commander romped in his local flat mile maiden breaker and is now under the care of Nick Zito.

Saratoga Red completes the field from post 13 for leading trainer Wayne Lukas. He graduated in his local debut in the slop and ran well chasing The Factor before fading to 4th in the Rebel.