The Everest 2021: Odds and analysis 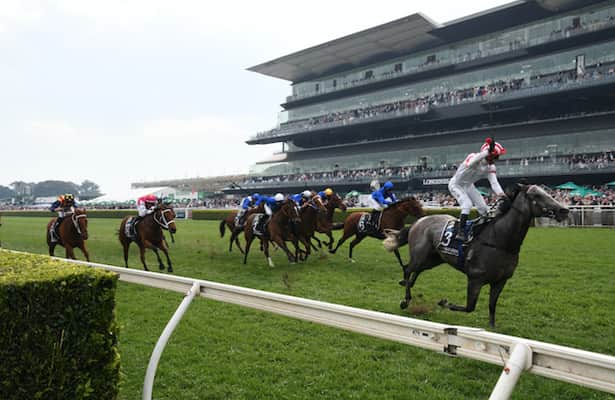 The setting: Randwick hosts a third straight Friday night of top-quality racing – the temporary rail was out 16 feet last week and moves into the “true” position (0’) for The Everest. Rain is predicted across the week; race day could be windy, in which case it can be advantageous to be “covered up” in running.

The broadcast: Nick Hines will anchor TVG’s coverage; Sky Racing’s Jason Witham will be on track at Randwick; yours truly will weigh in via Skype. First Post: 9:30 p.m. EDT/6:30 p.m. PDT.

The field: All runners carry 128 pounds except the mare Libertini (124) and the 3-year-old Home Affairs (116). Post positions in parentheses.

#1 Nature Strip (10) 7-2. The world’s highest-ranked turf sprinter. 17 wins from 32 starts. Prodigiously gifted, Nature Strip was enigmatic earlier in his career. Under Chris Waller’s patient tutelage, the horse is finally balancing his brilliance with tractability and professionalism. Has finished 4th and 7th in The Everest; this third time could deservedly be the charm.

#2 Classique Legend (5) 7-2. Went to Hong Kong (where his owner is based) after winning The Everest last year, but failed to acclimate. 83-year-old training legend Les Bridge got his “gray flash” home again in June, and is training him up to the race (used two prep races in 2020). Tries to emulate Redzel, who won the first two editions of this race; jockey Kerrin McEvoy is a common denominator, and shoots for a remarkable fourth win in five runnings of The Everest.

#3 Eduardo (7) 5-1. The world’s second-highest ranked turf sprinter; has twice out-gamed Nature Strip in photo finishes. He was a scintillating G1 winner in March when second-up from a layoff, prompting a similarly timed attack on The Everest.

#5 Trekking (4) 30-1. Godolphin’s aptly named representative is being given a third chance to reach the summit, after finishing third and fourth the past two years. Veteran son of Street Cry needs the breaks, but is genuine and will be closing.

#6 Masked Crusader (9) 8-1. Ran second behind Nature Strip in an April G1 race; has produced exhilarating rushes from the rear to win two of three starts this campaign in slightly easier company.

#8 The Inferno (12) 25-1. Star sprinter-miler in Singapore in 2019-20. Caught fire in Melbourne last month with a G2 win and close G1 second. Has never raced clockwise; hard task after being dealt the “visitor’s draw.”

#9 Embracer (3) 70-1. Late replacement for the slot holder whose Rothfire was sidelined by injury. Outclassed and impossible to embrace.

#10 Lost And Running (2) 20-1. Was hot when running through the grades earlier this year; snapped up early by his slot-holder. Albeit with some excuses, has been more lost than running in both starts this campaign against top-level competition.

#11 Libertini (8) 30-1. A dangerous weapon when fresh, this mare has deliberately been set for The Everest off a layoff. Has overcome a recent, minor setback. Knockout potential, but prefers firmer footing.

#12 Home Affairs (6) 10-1. Coolmore is replicating the formula that won them The Everest with Yes Yes Yes in 2019 – a (newly turned, on Aug. 1) 3-year-old colt trained by Chris Waller and ridden by Glen Boss. Home Affairs brilliantly won his seasonal debut before holding his own in a workout versus Waller’s Nature Strip.

The final word: Coolmore’s Tom Magnier: “Full credit to Racing New South Wales. They planted the seed for The Everest and it grew into a tree from Day One.”

The Randwick card will be broadcast live on TVG Friday night (first post: 9:30 p.m. EDT/6:30 p.m. PDT) alongside cards from Eagle Farm, Newcastle and Gold Coast. All races will be live-streamed in HD on the new Sky Racing World App, skyracingworld.com and major ADW platforms.