The Emirates Melbourne Cup: “The Race That Stops A Nation” 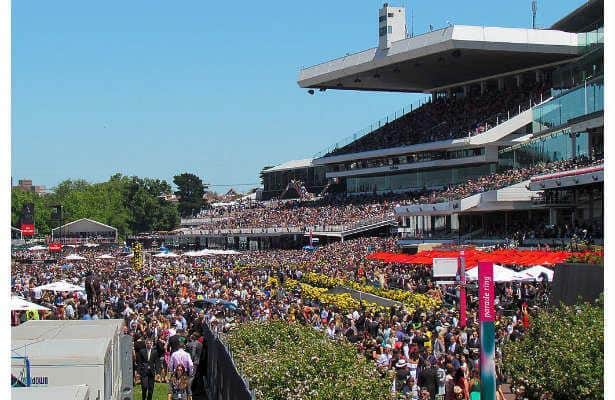 The 154th running of the Group 1 Emirates Melbourne Cup will be held on Tuesday November 4th, 2014 (Monday November 3rd in North America).

A total of 72 horses remain in contention to run in the $6.2 million staying test after first acceptances for Australia’s richest race were taken on October 6th, 2014.

A large contingent of internationally trained horses (15) also featured amongst the first acceptances compared with 12 at the same time last year.

Last year’s Emirates Melbourne Cup winning trainer Gai Waterhouse has paid up for The Offer (IRE), which was an early favorite for the race. The Sydney Cup (2 miles) victor has been winless so far this campaign but remains the top conditioner’s headline horse going into the race next month. Waterhouse did not accept with her much touted import Cafe Society (FR) after a leg injury was detected on Tuesday.

Leading Sydney trainer Chris Waller currently has five entries, the most fancied of the quintet being Kiwi-bred Who Shot Thebarman after his dominant win in the Group 3 Bart Cummings (1 ½ miles) at Flemington on Saturday, October 4th. He was given a one-pound Emirates Melbourne Cup penalty after the win. Waller’s other entries are Group 1 Metropolitan Handicap (1 ½ miles) winner Junoob (GB) and runner-up Opinion (IRE).

Sky Racing World will provide the broadcast and live video stream of the Emirates Melbourne Cup to simulcast wagering outlets across North America.