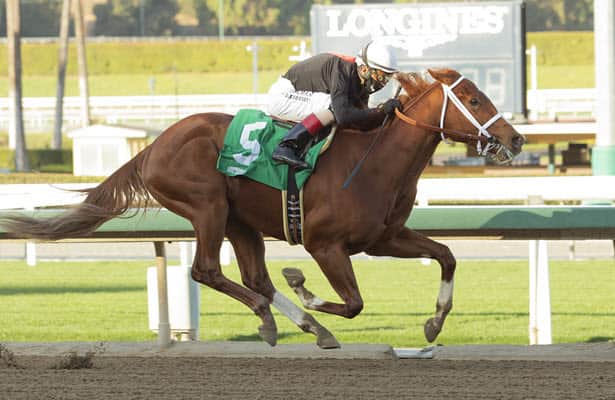 A lights-out first time maiden winner going 6 ½ furlongs on Dec. 27, trainer Eric Kruljac’s The Chosen Vron merits top billing among a field of nine in Saturday’s $200,000 California Cup Derby at a mile and one sixteenth.

Sponsored by the CTBA, the California Cup Derby, which is one of five Cal Cup Day Stakes on Saturday, is part of the lucrative Golden State Series for eligible California-bred or sired three-year-olds.  The Cal Cup Derby, originally run in 1990, was won by eventual two-time Horse of the Year California Chrome in 2014.

A chestnut gelding by Vronsky out of the Tiz Wonderful mare Tiz Molly, The Chosen Vron was off as the 2-1 favorite with John Velazquez on Dec. 27 and never looked a loser in an impressive front-running effort that resulted in a 6 ¾ length win and a lofty 86 Beyer Speed figure.  With Velazquez back at his Gulfstream Park base, Joel Rosario will take over on Saturday as The Chosen Vron stretches out to a mile and one sixteenth in his second start.

Although well beaten after stumbling early in the Los Alamitos Futurity (G2) Dec. 19, the Paddy Gallagher-trained Positivity, a winner of Del Mar’s Graduation Stakes three starts back on Aug. 2, rates a huge chance with Drayden Van Dyke up as he takes a big drop in class and tries two turns for the second time in what will be his fifth start.

Owned by Charles and Annie Winner, Positivity is a bay colt by Paynter, out of the City Zip mare Sam’s Sunny City.

A non threatening fourth in the one mile turf Eddie Logan Stakes here Dec. 27, the David Hofmans-trained Big Fish was a close fifth two starts back in the Cecil B. DeMille Stakes (G3) at one mile on turf Nov. 29 and rates a huge chance if he can act on dirt.  A one mile turf stakes winner four starts back, he was second and third, respectively, this past summer in maiden dirt sprints and has run at a mile on grass in his last five starts.

Owned by Legacy Ranch, Inc., Big Fish is by Mr. Big and is out of the Into Mischief mare Perched and he’ll be ridden for the first time by leading man Juan Hernandez.