Keeping up with the Bafferts: Updating 18 stable standouts 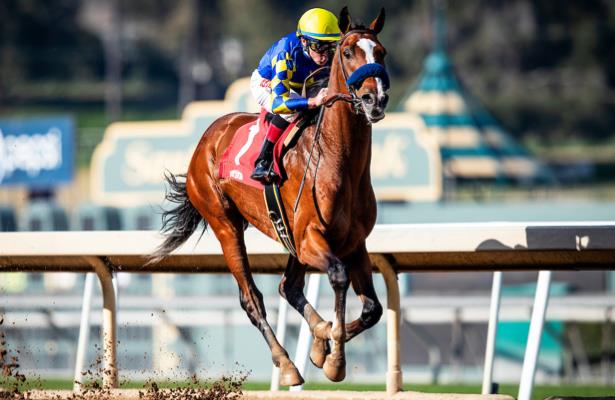 Two of his big three may have changed, but for trainer Bob Baffert it is business as usual as he continues to prepare for an unusual 2020 Kentucky Derby.

“I don’t have much information to give until next week when I decide,” he said Monday when he was asked about plans this summer for Authentic, Uncle Chuck and Cezanne.

But he did fill in more than a few blanks as he discussed the list of not only his 3-year-olds but the rest of his stable standouts.

One certainty is that Authentic is being aimed for Monmouth Park and the July 18 running of the $1 million Haskell Stakes (G1), a race that Baffert has won a record eight times. Now it is a Derby prep worth 100 points to the winner. But with Authentic safely qualified, the Haskell is more a case of trying to get him back to his winning ways after he finished second in the Santa Anita Derby (G1) this month to Honor A. P.

Bettors faded Authentic to 11-1 in the just-completed fifth pool of the Kentucky Derby Future Wager. As for Baffert’s recent maiden winners, Uncle Chuck was 13-1 and the $3.65 million colt Cezanne 19-1.

“Uncle Chuck is nominated everywhere,” Baffert said. “I’m looking at the Los Alamitos Derby (G3, July 4) or the Blue Grass (G2, July 11) for him. I won’t know until later in the week. And Cezanne? I have him in Thursday in an allowance race at Los Alamitos.”

In fact, Cezanne (4-5) is the morning-line favorite for Thursday’s fifth race at Los Al, a $40,000 mile for 3-year-olds and up that are non-winners of more than one. His four challengers include stable mate Bronn (2-1), a pace-setting maiden winner.

Undefeated Acorn Stakes (G1) winner Gamine is the current 3-year-old star of the barn after her 18 3/4-length victory at Belmont Park. Baffert still does not have a firm date in mind for the next race on her road to the Kentucky Oaks on Sept. 4.

“She just breezed (Monday) in 51 and change,” he said, referring to a four-furlong, 51.4-second workout at Santa Anita that was her first time back on the track since her win on Long Island, N.Y., on June 20. “That was pretty good. She came out of the race pretty well. But no plans for her yet.”

As if having the 7-4 favorite in Oaks futures overseas was not enough, Baffert has Crystal Ball, a 3-year-old filly by Malibu Moon that was a 6 1/4-length winner in a maiden race June 14 at Santa Anita.

“We’ve got her nominated everywhere,” he said. “She was real impressive. A late bloomer? Hopefully. She looks good.”

Among Baffert’s older horses, Maximum Security is the 6-1 futures favorite to win the Breeders’ Cup Classic. He has not raced since his Feb. 29 victory in the $20 million Saudi Cup – and since he was transferred to Baffert after former trainer Jason Servis was charged in a federal horse-doping sting.

Baffert also had these plans for some of his other horses:

Eclipse Award recipient Game Winner: “He is in Kentucky right now. We’re still working on what’s next for him.”

Mucho Gusto, fourth in the Saudi Cup: “I’m just freshening him up to get him ready in the fall. Basically (owner Prince Faisal) wants him to go back to the Saudi Cup next year.”

G1 winner Eight Rings: “I sent him to Los Alamitos to work for a month. I’m looking at maybe the Allen Jerkens Memorial (G1, Aug. 1) at Saratoga for him.”

Hollywood Gold Cup winner Improbable: “There’s no race picked out for him yet.”

Roadster, 0 for his last 7: “He was laid up in Kentucky, and he’s coming back. (Owners Peter and Ann Fluor and K.C. Weiner) just wanted to give him some time.”

Injured 3-year-old colt Charlatan: “He’s at Stonestreet Farm in Florida. He went down there to have the surgery on that ankle. He’ll be back in about 45 days.”

The 4-year-old filly Fighting Mad: “She’ll run next in the Clement Hirsch (G1) down at Del Mar.”

Baffert also said that owners Gary and Mary West sent Kingly and High Velocity out of Southern California and, therefore, to other trainers and that the injured Nadal is at his barn and probably retired, as owner George Bolton declared last month.