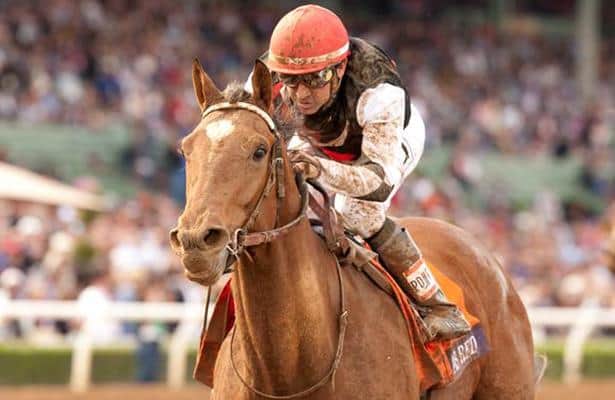 FINISH LINES: Santa Anita’s main track was closed for training Friday due to inclement weather. Track Superintendent Dennis Moore had the track sealed after Thursday’s last race, but reported only “a couple-hundredths” of an inch of rain as of 9 o’clock Friday morning. There were 37 recorded workouts on the training track . . . Pasadena Stakes winner Dress in Hermes was scratched Friday. “He got loose today and I don’t want to take a chance running him until I can check him out,” trainer Janet Armstrong said by phone from her headquarters at San Luis Rey Downs . . . Bob Baffert is set for a live interview 4:30 today on KLAC 570 AM Sports Radio on the Petros and Money Show . . . Reports of an elevated white cell blood count on Kentucky Derby favorite Nyquist were a matter of opinion, according to Leandro Mora, assistant to trainer Doug O’Neill. “One lab had it high, but another had it normal,” Mora said at Santa Anita Friday. “The horse is kicking down his stall at Keeneland.” . . . Alan Sherman, at Santa Anita where he will saddle Mucho Chrome for father Art in Saturday’s 12th race for three-year-old California-bred maiden allowance horses, says California Chrome is “just standing up to his knees in grass and relaxing” at Taylor Made Farm in Kentucky after his dramatic win in the Dubai World Cup on March 26. “He looks great there. He’ll probably be back in California the first week in May, right around Derby time.” . . . Judy Weinstein of Marketing is the 3-1 favorite to win the Women’s Division of Saturday’s Santa Anita Derby Day 5K run, while Steward Scott Chaney is 1-9 (Songbird?) in the Men’s Division. The top three finishers in each category receive medals . . . Baldwin Ave. will be closed to vehicular traffic tomorrow between the 210 Freeway and Huntington Drive from 7:30 a.m. until 9:30 a.m. in order to accommodate foot traffic related to the 5K Run and Walk. Accordingly, Santa Anita’s Gate 8, which adjoins the Westfield Shopping Mall on Baldwin Ave., and Gate 7, at the track’s northwest end, will also be closed to vehicles during the same time frame. Those wishing to visit Clockers’ Corner Derby Day morning can enter the track on Santa Anita’s northeast perimeter, through Gate 5, or on the track’s southern perimeter, through Gate 3. Gates 3 and 5 will be open for easy access to Clockers’ Corner beginning at 5 a.m. and will remain open throughout the day. Santa Anita’s main track will be closed for training at 7:30 a.m. Gate 3 is located at the intersection of Holly Ave. and Huntington Drive. Gate 5 is at the confluence of Colorado Place and Huntington Drive . . . Edwin Maldonado (Sunday Rules for Phil D’Amato), Drayden Van Dyke (Birdatthewire for Tom Proctor), Martin Garcia (Enchanting Lady for Baffert) and Alex Solis (Super Majesty for Steve Asmussen) have those respective mounts in Saturday’s Grade I Madison at Keeneland. Garcia also rides Donegal Moon for Todd Pletcher in the Blue Grass . . . Agent Tora Yamaguchi has leading rider Rafael Bejarano booked on American Pioneer for Wayne Catalano in next Saturday’s Arkansas Derby and on Santa Margarita winner Tara’s Tango for Jerry Hollendorfer in next Friday’s Grade I Apple Blossom at Oaklawn . . . Trainer Gary Stute was happier for jockey Matt Garcia than he was for himself Friday after they teamed to win their first race of the meet when Stir Fry, a three-year-old daughter of stakes-winning Papa Clem which Stute trained, scampered home first by nearly two lengths as the odds-on favorite in Thursday’s fifth race. “It was great, good to see him win a race,” Stute said of veteran Garcia, recently returned from major injuries that had him sidelined several months. “I thought he rode the horse perfect and everything worked out well.” . . . Gaming Today handicapper Richard Saber will be Tom Quigley’s guest Saturday at 10:50 a.m. in the East Paddock Gardens . . . Santa Anita’s 63-day Winter Meet ends Sunday. Live racing returns to The Great Race Place May 5 and runs through July 10.