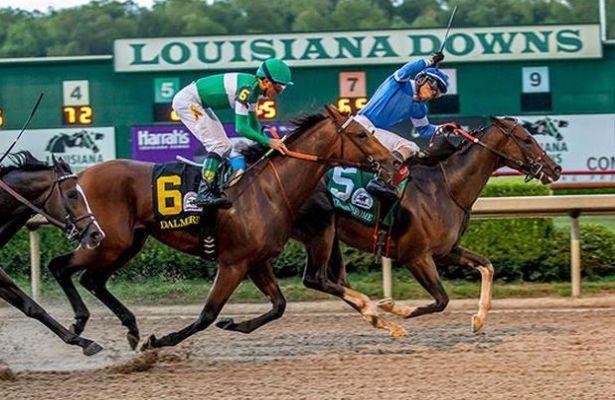 The Oklahoma Derby Day program was compiled Thursday morning in the Remington Park racing office. The headline event, the Grade 3, $400,000 Oklahoma Derby drew a field of 11.

Overall the 12-race program features 10 stakes events and total purse money of $1,409,150. The richest Thoroughbred program in Remington Park and Oklahoma history will begin at 3pm-Central on Sunday, Sept. 25.

Texas Chrome, winner of the Grade 3, $400,000 Super Derby at Louisiana Downs in Bossier City, La. on Sept. 10, drew the rail post position. The Texas-bred colt will break from the inside in pursuit of his third consecutive stakes win and second-straight derby. Owned by Keene Thoroughbreds of Greenville, Texas and trained by J.R. Caldwell, Texas Chrome will be ridden by Remington Park’s leading jockey C.J. McMahon.

Texas Chrome has been training at Remington Park since the stable area opened in July. He has one previous start in Oklahoma City, finishing fifth in the $100,000 Clever Trevor Stakes in 2015 when he was a 2-year-old. Texas Chrome finished 7-1/4 lengths behind Suddenbreakingnews in the Clever Trevor.

In six 2016 starts, Texas Chrome has yet to post anything less than a third-place finish. He was third in the $150,000 Bachelor Stakes at Oaklawn Park in Hot Springs, Ark. in April. After romping by 10-1/2 lengths in the Texas Stallion Stakes at Lone Star Park in Grand Prairie, Texas in May, Texas Chrome finished a solid third in the Grade 3, $100,000 Matt Winn Stakes at Churchill Downs in Louisville, Ky. in June. That race propelled him to a second-place run in the Grade 3, $250,000 Iowa Derby at Prairie Meadows and then his wins at Louisiana Downs in the $100,000 Prelude Stakes and Super Derby.

Texas Chrome has been installed as the morning-line favorite at 9-5 odds by Remington Park odds-maker Rick Lee.

Ready Dancer drew post-position three and will make his first start since running fourth in the $100,000 Curlin Stakes at Saratoga in late July. He is third in the morning-line odds at 5-1.

Ready Intaglio, the Grade 3 Canadian Derby winner, brings the longest winning streak into the Oklahoma Derby. The colt has won three consecutive races, all at Northlands Park in Edmonton, Alberta. Trained by Amber Meyaard, Ready Intaglio is owned by Eurico Martens and has the most career starts of any in the Oklahoma Derby with 16.

The field by post position and program number, with trainer, jockey and morning-line odds, for the Grade 3, $400,000 Oklahoma Derby, 7:40pm-Central:

The Oklahoma Derby is the 11th of 12 races on Sunday with an approximate post time of 7:40pm.

Texas Chrome is the top earner in the Oklahoma Derby with $602,462 accumulated over 12 career starts. He also has the most wins of any of the derby entrants with seven, including three this year...

Trainer Robertino Diodoro, winner of the 2013 Oklahoma Derby with Broadway Empire, has entered a trio of horses for the race in Way Striking, Inside Straight and Solve. If all three start, it will match a record for most horses in the race from the same barn. Donnie Von Hemel started three in 1998 with Mr Ross, Leave A Legacy and Sir Tiff in the race…

The Canadian Derby is the most popular prep race for the Oklahoma Derby this year with three runners coming from the race in Alberta: Ready Intaglio (winner), Solve (2nd) and Inside Straight (4th)…

The schedule of races on Oklahoma Derby Day, and their post times (all Central):