Test analysis: An improving closer can beat the favorite 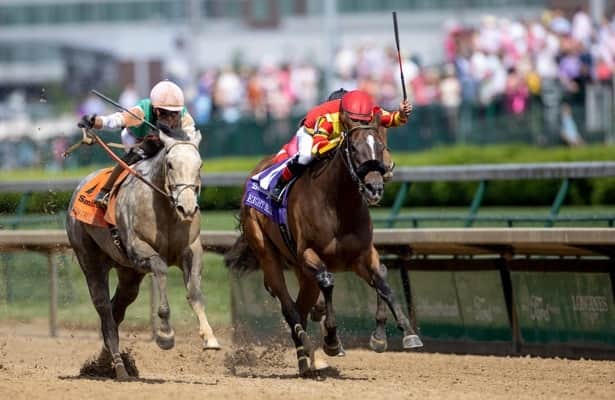 Without another talent on the level of Covfefe or Gamine present, the Grade 1, $500,000 Test Stakes at Saratoga on Saturday offers bettors a competitive race with many directions to go. The seven-furlong dirt race is for 3-year-old fillies.

At first glance, the pace scenario falls around the fast side. The final selection below is an improving closer who lost to Search Results by only a half-length last time and might turn the tables if she can receive a good trip and pace.

1. Illumination, 30-1 (Medaglia d’Oro – Bob Baffert/John Velazquez – 5: 1-1-2 - $98,900): This filly broke her maiden by eight lengths for Baffert at Santa Anita, but the speed figure on both TimeformUS and BRIS appears average at best. Now she gets thrown to the wolves off that maiden win, which is strange because Baffert knows whether his horses are good enough for Saratoga. Without stronger evidence that Illumination can step forward by several lengths and handle this group, she is best left off tickets. Toss.

3. Zaajel, 8-1 (Street Sense – Todd Pletcher/Joel Rosario – 5: 3-0-0 - $228,640): This filly upset Always Carina at 18-1 in the Mother Goose Stakes (G2) and ran a career high 110 TimeformUS Speed Figure in the process. The 110 on TimeformUS seems out of line in comparison with Zaajel’s previous dirt races, but it is possible she took a step forward either physically or mentally. Also, maybe Zaajel responds better to Joel Rosario, who rode this filly for the first time in the winning Mother Goose effort. But from a betting perspective, it is not a great idea to “chase” an upset winner next time. Bettors are supposed to make the wedding but not the funeral. If the pace sets up, she might finish in one of the bottom slots. Use underneath.

4. Obligatory, 8-1 (Curlin – William Mott/Jose Ortiz – 5: 2-1-0 - $317,780): From a value standpoint, Obligatory is an interesting filly. In her last two starts, she won the seven-furlong Eight Belles Stakes (G2) at Churchill Downs in April and ran a closing second to Search Results in the Acorn Stakes (G1). In the latter race, she lost by only a half-length to one of the top 3-year-old dirt fillies in the nation. The intriguing part is that bettors do not seem likely to overbet Obligatory, especially with Search Results present again. Yet there is no reason why Obligatory cannot improve in this spot and turn the tables. Obligatory shows a 114 on TimeformUS for the runner-up in the Acorn, which is competitive against this field. She does need a few breaks such as pace and a good trip, but she is the top choice in this analysis. The pick.

5. Always Carina, 9-2 (Malibu Moon – Chad Brown/Flavien Prat – 3: 2-1-0 - $144,600): Forgive Always Carina’s loss in the Mother Goose (G2) to Zaajel. Not every talented sprinter or one-turn miler can stretch out to a route distance, and she likely found it too far. Before that runner-up finish, Always Carina broke her maiden by four lengths at Aqueduct in April and won a one-turn mile at Belmont in May by 9 3/4 lengths. On the negative side, she runs as a pacesetter, and that is a problem with speed horses such as Illumination and Bella Sofia present. While Illumination is not a win threat, she can weaken the leaders. Bella Sofia endured a fast pace last time and might be willing to duel with Always Carina and Illumination in this spot. Consider moving Always Carina up if one of those two pace opponents scratch. Otherwise, the pace scenario looks too taxing. Toss.

6. Make Mischief, 30-1 (Into Mischief – Mark Casse/Tyler Gaffalione – 12: 4-3-2 - $365,750): This filly’s record is admirable. In 12 career starts, she hit the trifecta nine times. One of the misses came recently when she ran fourth in the Mother Goose. But the effort is forgivable because she stumbled at the start. She lost by only 2 1/2 lengths to Zaajel, which is not a terrible margin. She also was third in the Acorn, behind Search Results and Obligatory, and third in Obligatory’s Eight Belles as well. With that kind of consistent record, superfecta players might want to use this hard-trying runner in the third or fourth slots. Use underneath.

7. Search Results, 8-5 (Flatter – Chad Brown/Irad Ortiz Jr. – 5: 4-1-0 - $804,000): In five career starts, her only loss came by a neck to Malathaat in the Kentucky Oaks. Otherwise, Search Results shows wins in the Busher Invitational, Gazelle Stakes (G2) and more recently the Acorn Stakes over Obligatory and Make Mischief. With that said, she did not dominate the Acorn; Obligatory lost by only half a length. According to TimeformUS, the Acorn pace was moderate, which means Obligatory did not receive a big setup when losing by only that short margin. The runner-up simply ran well. Obviously, the price is not great on Search Results. To add a point to her side, Search Results drew well outside and should find a great stalking position in the clear. Odds and value aside, Search Results is the best filly in this race based on accomplishments and overall ability. She is not invincible, though, and cuts back to a shorter distance. Win contender.

8. Bella Sofia, 6-1 (Awesome Patriot – Rudy Rodriguez/Luis Saez – 3: 2-1-0 - $130,100): In two races with Lasix, Bella Sofia has been excellent with an 11 1/4-length romp to break her maiden and a 6 1/2-length allowance win at Belmont more recently on July 11. From a visual standpoint, she won that allowance race easily. She also shows a 118 TimeformUS Speed Figure for the win. Without Lasix, Bella Sofia ran only a good second in the Jersey Girl Stakes in June, with a 108 on TimeformUS. In fairness, the Jersey Girl was her first attempt at a stakes race and sometimes horses need time to adjust to the higher level before they start winning. To add to the no-Lasix concern, she also stretches out to seven furlongs for the first time and faces pace opponents in Illumination and Always Carina. Without Lasix, can Bella Sofia endure a pace battle and still hold off the closers? It is possible for her to overcome the obstacles, but she looks like a bad bet in this spot. Toss.

As long as the main speed horses remain in the race, Obligatory is the top choice. She lost by only a half-length to Search Results last time, and that is not a big margin in dirt racing. With the right trip and pace scenario, she can turn the tables.

Obligatory is the best choice for a win and place bet.

In multi-race wagers, include Search Results with Obligatory.

*Rating is based on HRN fan votes, which rank the Top Active Horses in training.
Obligatory Search Results Test Test (2021)