Ten finalists on the 2015 Hall of Fame ballot 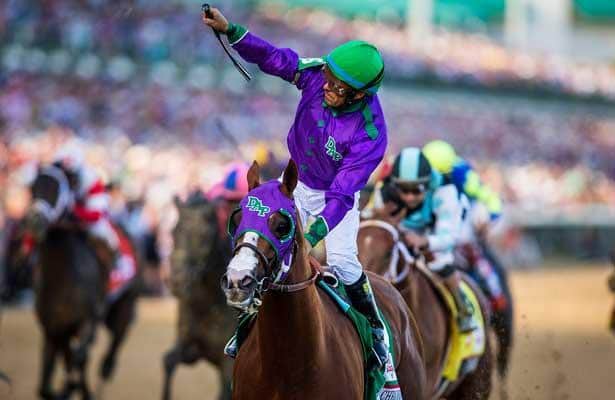 Espinoza, Nakatani, Black Tie Affair, Lava Man, Leatherbury and Whiteley are first-time finalists. Hall of Fame voters may select as many candidates as they believe are worthy of induction to the Hall of Fame. The four candidates with the highest vote totals will be elected.

The finalists were selected by the Hall of Fame’s 14-member Nominating Committee from a total of 68 initial candidates suggested by turf journalists, Thoroughbred industry participants and racing fans. To be eligible, trainers must have been active for 25 years, while jockeys must have been active for 20 years. Thoroughbreds are required to be retired for five calendar years before becoming eligible. All candidates must have been active within the past 25 years. The 20- and 25-year requirements for jockeys and trainers, respectively, may be waived, but a five-year waiting period is then observed before they become eligible. Candidates not active within the past 25 years are eligible through the Historic Review process.

The results of the voting on contemporary candidates will be announced on Monday, April 20. The induction ceremony will be held at the Fasig-Tipton Sales Pavilion in Saratoga Springs on Friday, Aug. 7 at 10:30 a.m. The ceremony is free and open to the public.

Other major victories for Antley included the Jockey Club Gold Cup, Woodward, Santa Anita Handicap, Hollywood Derby, Alabama, Wood Memorial, Manhattan Handicap, Carter Handicap, Louisiana Derby, Blue Grass, Coaching Club American Oaks and Jerome Handicap, among others. On Oct. 31, 1987, Antley won nine races when he had four victories at Aqueduct and five at the Meadowlands. He also had a streak of 64 consecutive days with at least one win in 1989.

Espinoza, 42, began his career in 1993 and has won 3,188 races through Feb. 24. He ranks 19th all time in earnings with $171,130,260. A two-time winner of the Kentucky Derby and Preakness, Espinoza has won 209 graded stakes and 412 overall stakes. He has ranked in the top 10 nationally in earnings six times since 2000, including a peak position of No. 3 in 2004 and 2006. Espinoza won 19 graded stakes in 2014, including nine Grade 1s. He won the Kentucky Derby, Preakness, Santa Anita Derby, Hollywood Derby and San Felipe with Horse of the Year California Chrome. His other Grade 1 wins in 2014 included the Breeders’ Cup Juvenile and Starlet with champion Take Charge Brandi and the FrontRunner and Del Mar Futurity with champion American Pharoah.

Perret, 64, won 4,415 races and had purse earnings of $113,837,299 in a career that spanned from 1967 through 2005. He was North America’s leading apprentice jockey in earnings in 1967 and won the Eclipse Award for Outstanding Jockey in 1990. In 1987, Perret rode Bet Twice to a 14-length victory in the Belmont Stakes, denying the Triple Crown hopes of Alysheba. During his Eclipse Award year of 1990, Perret won the Kentucky Derby with Unbridled and Grade 1s with Housebuster, Safely Kept, Rhythm and With Approval.

Black Tie Affair (Miswaki—Hat Tab Girl, by Al Hattab) was bred in Ireland by American businessman Stephen D. Peskoff. Initially owned by Edward P. Swyer, Black Tie Affair was sold as a 3-year-old to Jeffrey Sullivan for $125,000. He was trained by Walter Reese at age 2 and Ernie T. Poulos for the remainder of his career.

The Eclipse Award winner for Horse of the Year and Champion Older Male in 1991, Black Tie Affair posted a career record of 18-9-6 from 45 starts with earnings of $3,370,694. Black Tie Affair won a total of 12 stakes races, including 11 graded events. In 1991, he closed his career with six consecutive wins (all in graded races), including a victory in the Breeders’ Cup Classic in which he defeated Twilight Agenda, Unbridled, Strike the Gold and Summer Squall. Black Tie Affair’s wins that year also included the Stephen Foster, Michigan Mile, Cornhusker, Philip H. Iselin and Washington Park (defeating Summer Squall) handicaps and the Commonwealth Breeders’ Cup Stakes (defeating Housebuster). He won at six different tracks that year. Black Tie Affair won graded stakes at ages 3, 4 and 5 and won races at a total of nine tracks in his career.

Kona Gold (Java Gold—Double Sunrise, by Slew o’ Gold) was bred in Kentucky by Carlos Perez at Twilite Farm and sold for $35,000 at Keeneland to a partnership that included trainer Bruce Headley, Irwin and Andrew Molasky and Michael Singh’s High Tech Stable.

The Eclipse Award winner for Champion Sprinter and runner-up for Horse of the Year as a 6-year-old in 2000, Kona Gold posted a career record of 14-7-2 from 30 starts with earnings of $2,293,384. During his championship year, Kona Gold won the Breeders’ Cup Sprint, Ancient Title, Bing Crosby, Potrero Grande and Palos Verdes handicaps. In winning the Breeders’ Cup Sprint, Kona Gold broke the Churchill Downs and Breeders’ Cup record for six furlongs with a time of 1:07.77. A five-time Breeders’ Cup Sprint participant, Kona Gold won the Bing Crosby and Potrero Grande again in 2001. He also had multiple victories in the El Conejo Handicap, including a Santa Anita track record in 1999. Kona Gold’s other major wins included the San Carlos Handicap and Los Angeles Handicap. Overall, he won 10 graded stakes, including two Grade 1s.

A winner of seven Grade 1 races — more than any other California-bred in history — Lava Man posted a career record of 17-8-5 from 47 starts with earnings of $5,268,706. Among California-bred horses, only Hall of Famers Tiznow and Best Pal have higher career earnings. Lava Man won three consecutive editions of the Hollywood Gold Cup (2005 through 2007), matching a feat Hall of Famer Native Diver accomplished from 1965 through 1967. Lava Man also won back-to-back runnings of the Santa Anita Handicap in 2006 and 2007. His other significant wins included the Pacific Classic, Californian, Sunshine Millions Classic, Charles Whittingham Memorial Handicap, Goodwood Breeders’ Cup Handicap and Sunshine Millions Turf. In his first Hollywood Gold Cup victory, Lava Man won by a record eight lengths and earned a 120 Beyer Speed Figure. With his victory in the Whittingham in 2006, Lava Man became the first horse since Vanlandingham 21 years earlier to win a Grade 1 on both dirt and turf in the same year. Lava Man was also the first horse to win the Hollywood Gold Cup, Santa Anita Derby and Pacific Classic in the same year (a feat since equaled by Game On Dude).

Xtra Heat (Dixieland Heat—Begin, by Hatchet Man) was bred in Kentucky by Pope McLean’s Crestwood Farm and sold as a 2-year-old for $5,000 at Maryland’s Timonium sale to trainer John Salzman, Sr. and partners Ken Taylor and Harry Deitchman.

The Eclipse Award winner for Champion 3-Year-Old Filly in 2001, Xtra Heat compiled a career record of 26-5-2 from 35 starts and earnings of $2,389,635. Xtra Heat won a total of 25 stakes races, 10 of which were graded events. She registered two six-race win streaks and had two victories in the Barbara Fritchie Handicap and Endine Stakes. Xtra Heat’s wins included the Grade 1 Prioress (setting a stakes record of 1:08.26), as well as the Vagrancy and Genuine Risk handicaps and the Astarita and Beaumont stakes.

Leatherbury, 81, won his first race at Florida’s Sunshine Park in 1959 and currently ranks fourth all time with 6,449 wins. He has won 52 training titles in Maryland (26 each at Pimlico and Laurel) and four at Delaware Park and has career purse earnings of $62,792,375. Leatherbury led all North American trainers in wins in 1977 and 1978 and won 300 or more races each year from 1975 through 1978. He ranked in the top three in North American wins each year from 1975 through 1980 and has finished in the top 10 nationally in wins 18 times and in earnings four times. Leatherbury has won 23 graded stakes races and 153 overall stakes.

Source: National Museum of Racing and Hall of Fame