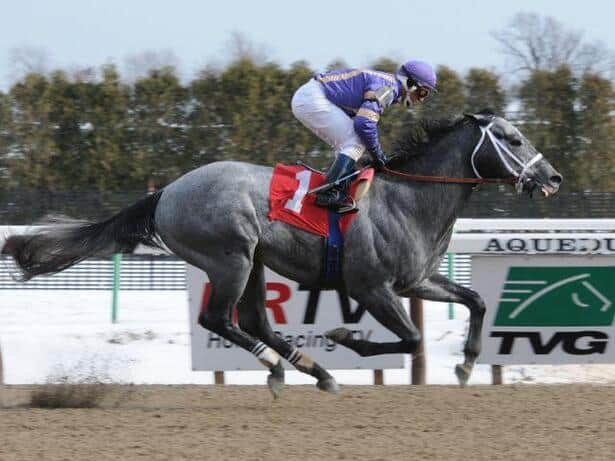 The Fountain of Youth Stakes (G2) might be the headline event at Gulfstream Park on Saturday but the Hutcheson Stakes (G2) appears to be the better wagering opportunity.

Ten three-year-olds will line up for the seven furlong Hutcheson and Todd Pletcher's Travelin Man is the 5-2 morning line favorite.

Travelin Man ran fast in his romping six furlong debut in January and he is one of several early runners in today's contest. John Velazquez rides the fleet son of Trippi and he shows five published Palm Meadows works for this.

His uncoupled stablemate Razmataz won a six furlong allowance race at Gulfstream Jan 12. The $200,000 purchase will probably stalk the pace today and should offer value at 10-1 on the line.

Flashpoint smartly captured his inner track debut at Aqueduct but he did not nearly run as fast as Travelin Man. He was flattered when the place finisher came back to win and the Rick Dutrow trainee arrived in South Florida earlier this month.

Crossbow did everything right in a course/distance allowance win Jan 29. He has the hot Ramon Dominguez/Kiaran McLaughlin team in his corner but the early runner will have to work hard to maintain position from the inside post.

Madman Diaries finished a respectable 4th when last seen in the BC Juvenile Turf (G2) in November. He won the Sapling (G3) on dirt and adds more pace fuel to the fire.

Black N Beauty dueled and faded to 5th in the Holy Bull (G3) last time. Mucho Macho Man returned to capture the Risen Star (G2) and this shorter trip probably helps. The pace will be hot and he did stalk and pounce in his Churchill maiden breaker last November.

Leave of Absence, 6th in the Holy Bull, appears to be the best late mover in this one and would appreciate a pace meltdown. The $145,000 son of Harlan's Holiday adds blinkers and sports a bullet work for this.

Manicero has won four straight including back-to-back $75,000 stakes tallies at Tampa Bay. The waters get deeper today but he is 2-for-2 at seven panels and is well drawn for an outer tactical journey.

Royal Currier brings plenty of speed to the table but has yet to race beyond six furlongs and might have to work hard to keep up from the outside post.

Florida-bred Little Drama completes the field. The David Fawkes charge makes his first start since October and could need the outing. All of his races and works have been at Calder.

The Hutcheson goes as the 9th race on the Feb 26 card with a scheduled post time of 4:51PM ET.