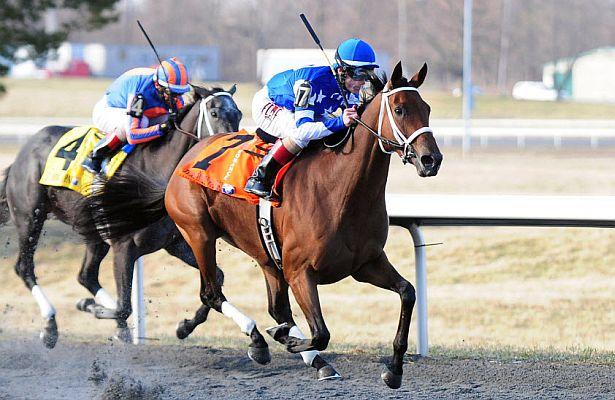 A field of 10 3-year-old fillies including stakes winners Aurelia's Belle, Interrupted and She's Offlee Good passed the entry box Wednesday for Saturday's Grade III $150,000 Arlington Oaks. The mile and an eighth Polytrack race will go as the seventh on Saturday's 10-race card that starts at 1 p.m. Central time.

James Miller's Aurelia's Belle comes into the local Oaks off an adjudged victory in the Grade III Regret Stakes at Churchill Downs last month following the disqualification of A Little Bit Sassy for bumping and floating out the daughter of Lemon Drop Kid in the stretch of the mile and an eighth grass affair.  Prior to that, the Wayne Catalano trainee finished a well-beaten ninth in the Grade I Kentucky Oaks after scoring a win in the one-mile Grade III Bourbonette Oaks over the Turfway Park Polytrack. The career earner of more than a quarter of a million dollars will be reunited with jockey Channing Hill.

Shipping in from his Fair Hill training base is the Graham Motion-trained Interrupted, winner of the Listed $100,000 Penn Oaks at Penn National Race Course in May.  Previously the Pin Oak Stud colorbearer finished third in the Grade III Florida Oaks at Tampa Bay Downs.  All four of the Broken Vow filly's races have been on turf but she does all of her training over the Tapeta surface at Fair Hill, so Arlington's Polytrack surface may not be a concern for her connections.  Angel Serpa rides.

Holmark Stables' She's Offlee Good returns to the track and surface where she won the Listed $100,000 Arlington-Washington Lassie last September.  Winless since that effort, she has been on the improve of late with a third-place run in the $75,000 Northbound Pride Oaks at Canterbury Park.  Should the Richie Scherer-trained daughter of Offlee Wild win Saturday's Oaks, she would be just the third filly to do so - the others being Top Flight (1931-32) and Mariah's Storm (1993-94).  E. T. Baird has the mount.

Curtis Green's stakes-placed Maria Maria finished third to She's Offlee Good in the 2013 Lassie, but most recently captured a second-le vel allowance against older rivals over a Polytrack one-turn mile.  The daughter of Curlin is trained by Jimmy DiVito and will be ridden Saturday by C.H. Marquez Jr.