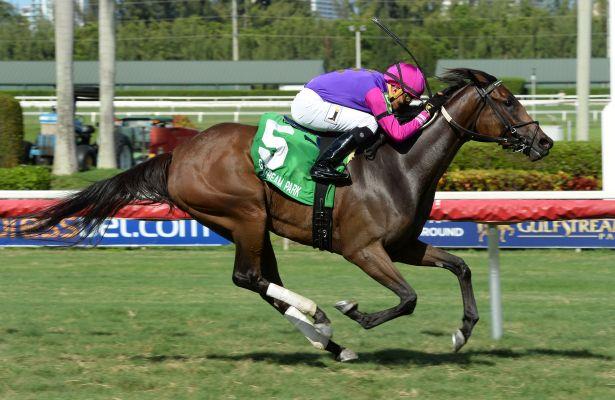 The recipient of a ground-saving and a well-judged ride from Gerardo Corrales, the 3-year-old daughter of Temple City ran 7 ½ furlongs on turf in 1:28.48 to collect her third victory in her last four starts.

Rated in fifth around the turn and along the backstretch as First Illusion set the pace under Lionel Reyes, Temple Fur was eased off the rail to split horses on the turn before powering through a hole as the field fanned out while straightening into the stretch. After saving ground and energy into the stretch, the 5-2 favorite sprinted away on fresh legs to easily prevail over her six rivals.

“Corrales was patient with her. They got in tight a little for a bit but saved all the ground. She ran great,” trainer Jessica Campitelli said.

After breaking her maiden over a sloppy track by 6 ½ lengths in an off-the turf maiden claiming race in January, Temple Fur began her turf career with a pair of even efforts before graduating April 22 and capturing an optional claiming allowance May 22. In her stakes debut, she finished second behind Sharp Kitty, who was scratched Monday, in the Christmas Past Stakes June 11.

“She’s getting better,” Campitelli said. “We liked her from the very beginning. She seems to be improving with every start.”

First Illusion held on for second money, a neck ahead of Pancake.

In the race preceding the Betsy Ross, Storm Warning ($9.40) put his nonagenarian trainer George Handy in the winner’s circle. Handy, who began his training career in 1946, will celebrate his 93rd birthday July 13.

Live racing will resume at Gulfstream Park on Thursday with a nine-race program. at 1:15 p.m.