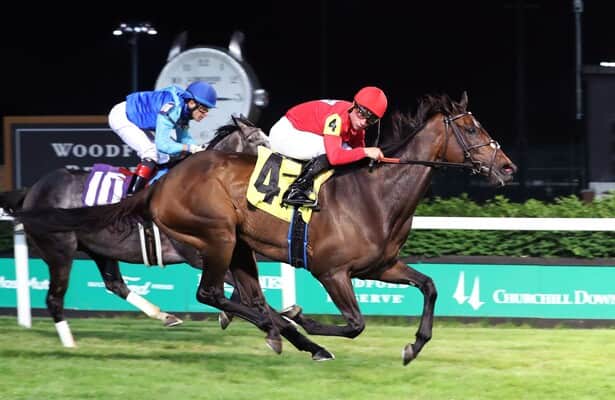 Town and Country Racing’s Temple City Terror will look to double up on graded scores in Friday’s Grade 3, $300,000 Long Island, an 11-furlong inner-turf test for fillies and mares 3-years-old and up, at Aqueduct Racetrack.

Trained by Brendan Walsh, the 6-year-old Temple City dark bay was purchased for $600,000 at the recently concluded Keeneland Association November Breeding Stock Sale. Walsh trained her before the sale, and Town and Country kept her with him. She made the grade last out in the 12-furlong Dowager (G3) on October 23 over firm footing at Keeneland. With Tyler Gaffalione up, Temple City Terror was 10 lengths off the pace in eighth position at the first point of call, but swept to the lead through the final turn en route to a comfortable three-length score.

Walsh said Temple City Terror, who breezed back a half-mile in 49.80 seconds November 17 over the Churchill Downs main track, has exited that effort soundly.

“She's done great from that race,” Walsh said. “She's improving as she's getting older. She's been a great servant and had a great year. She ran great last out at Keeneland and she's a long way from being finished yet. Friday will be a big test, but hopefully she can come through that as well.”

Temple City Terror, who boasts a record of 28: 6-5-5 for purse earnings of $696,218, successfully defended her title in the 12-furlong Keertana in May at Churchill Downs. She followed with an off-the board effort in the Robert G. Dick Memorial (G3) in July over soft going at Delaware and a runner-up effort to multiple Grade 1 winner War Like Goddess in the Glens Falls (G2) in August at Saratoga Race Course. Temple City Terror entered the Dowager from a close fourth in the Flower Bowl (G2) in September at the Spa.

Temple City Terror often races from double-digit lengths off the pace, but Walsh said the mare is capable of being closer if needed when exiting post No. 2 under Jose Ortiz, who guided Maxfield to a pair of Grade 1 scores for the veteran conditioner.

“A lot depends on the pace,” Walsh said. “She does like to have pace in front of her and when there's something to run at, she comes on very well at the end of her races. We'll let the pace of the race decide it. Jose is a great rider and has been very lucky for me down through the years and we're delighted to have him on.”

Peter Brant’s Rocky Sky, a 4-year-old Irish-bred daughter of Rock of Gibraltar, enters from a 1 1/4-length score over Capital Structure in the Waya (G3), contested October 2 over 11 furlongs over yielding Big A turf.

Initially campaigned in her native Ireland, Rocky Sky debuted for Brown in August 2021 with an off-the-board effort in the Saratoga Oaks Invitational (G3) and did not return until her current campaign. She was a close second in March to stablemate Bleecker Street in the Hillsborough (G2) at Tampa Bay Downs in her only previous graded outing this season.

The German-bred joined Brown in 2021 and posted a record of 6: 1-1-2, including a close third in the 10-furlong E. P. Taylor (G1) contested over yielding going at Woodbine. Kalifornia Queen captured the 2020 Gestut Rottgen Diana Trial (G2) at Hoppegarten for her former conditioner Hank Grewe.

Klaravich Stables’ Capital Structure, a 5-year-old Lope de Vega chestnut, boasts a ledger of 10: 3-2-1 for purse earnings of $218,915. She captured an 11-furlong optional-claimer in July over firm footing at the Spa ahead of a sixth-place finish in the nine-furlong All Along in September at Pimlico. She closed from last of six to complete the exacta in the Waya.