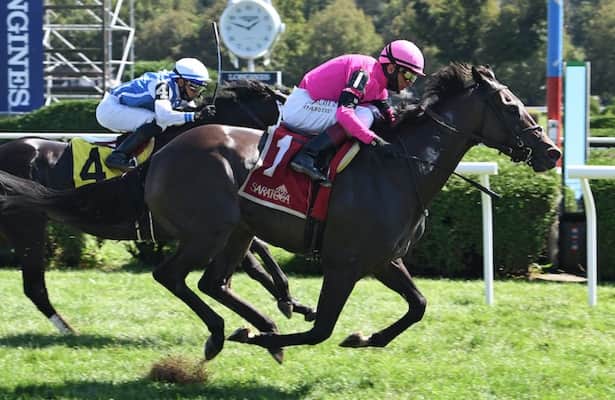 Hall of Fame jockey John Velazquez sent Tell Your Daddy to the front and the Scat Daddy gelding did not relinquish the lead, posting a gate-to-wire victory by a half length in the Grade 2, $200,000 Bernard Baruch for 3-year-olds and up on Monday, closing day of the summer meet at Saratoga Race Course.

The 63rd running of the Bernard Baruch, contested over 1 1/16 miles on the Mellon turf course, saw morning-line favorite and early speed threat En Wye Cee scratch before the race after an early afternoon rainstorm. Tell Your Daddy, who ran second to Flavius going the same distance at Saratoga in the Fasig-Tipton Lure on Aug. 7, moved to the front after breaking from the inside post, leading the four-horse field through an opening quarter-mile in 24.92 seconds and the half in 50.75 over a yielding course.

Tell Your Daddy, off at 5-2, maintained the advantage out of the turn, with No Word giving pursuit along the rail in the stretch. But Tell Your Daddy pressed on under Velazquez’s right-handed encouragement, fending off No Word to hit the wire in 1:44.61 for his first stakes win overall and first victory in his last 13 starts.

TELL YOUR DADDY goes wire-to-wire in the Bernard Baruch (G2) with @ljlmvel aboard for @morley_racing! #Saratoga pic.twitter.com/gF7EaMnHGC

Tell Your Daddy, whose previous victory came against allowance company in February 2020 at Fair Grounds, returned $7.90 on a $2 win bet. He improved his career record to 4-4-2 in 24 starts.

"We were going to try and go to the lead anyway, but (En Wye Cee) coming out was a big help in terms of the fact that we thought we’d be able to clear,” trainer Tom Morley said. “I wasn’t going to give Johnny any instructions, but Jay (Jason Provenzano of owner Flying P Stables) and I had discussed the fact when he rode him last time (second in the Lure), I’d love to see what he could do on the front end in one of these races.

“En Wye Cee coming out probably helped our cause as well and it’s a yielding turf course and hard to close,” Morley added. “I was very dubious about how he would handle this ground. He’s run very well on very fast ground, but he has got some form on yielding turf.”

Morley claimed Tell Your Daddy for $40,000 out a fourth-place finish on Jan. 28 at Fair Grounds. Since coming into his barn, the 5-year-old has earned black type in three of his five starts, including a third-place effort in the one-mile Seek Again in May at Belmont Park before notching consecutive on-the-board finishes during the Saratoga meet.

“We were looking for horses with some real back class to them, and this horse ran a huge race in the Shakertown at Keeneland (finishing sixth in 2020),” Morley said. “He was flying at the end going five-and-a-half in what looked like a very good Shakertown and got beaten a length (1 1/2 lengths). I rang Jay and I said, ‘if we can get this horse to Belmont and go six or seven or a one-turn mile, he’s already won two mile-and-a-16th allowance races.’ So, that was our plan. We started at seven, went to a mile and then we came up here and went a mile and a 16th and Johnny said, ‘I think he’ll go further.’ So, it worked out brilliantly and it was great to see him getting his head in front. He’s run some huge races in defeat for us, but that was massive.”

Velazquez, who has the most wins by a jockey all time at Saratoga, picked up the mount on Tell Your Daddy for the first time in the Fasig-Tipton Lure, his previous best finish in a stakes before getting his picture taken for the Bernard Baruch.

“The turf is soft. You have to expect that with the rain we just got,” Velazquez said. “I was a little concerned. I was looking at his soft turf and yielding turf form and he was OK. But you just never know. When he ran on soft turf it was in shorter races. Going two turns helped him today, too.”

No Word, ridden by Manny Franco, topped 3-5 favorite L’Imperator by one length for second. Trained by Hall of Famer Todd Pletcher, who also was set to saddle En Wye Cee before scratching him, No Word made only his second start of his 4-year-old campaign following an eighth-place finish against allowance company on Aug. 6 at the Spa off a nine-month layoff.

“The pace was slow, but at the same time I wanted to give my horse a chance,” Franco said. “I know the other horse (L’Imperator) was the favorite, so I wanted to give a nice trip. That’s what I did and he ran well.”

L’Imperator, trained by Chad Brown, who has clinched the H. Allen Jerkens title for most wins by a conditioner in the Saratoga meet, was 2 1/4 lengths clear of Dreams of Tomorrow for third.

Interstatedaydream (6-1) gets it done in the Black-Eyed Susan
Trainer Brad Cox and jockey Florent Geroux earned...