Teeth of the Dog Heads Dwyer 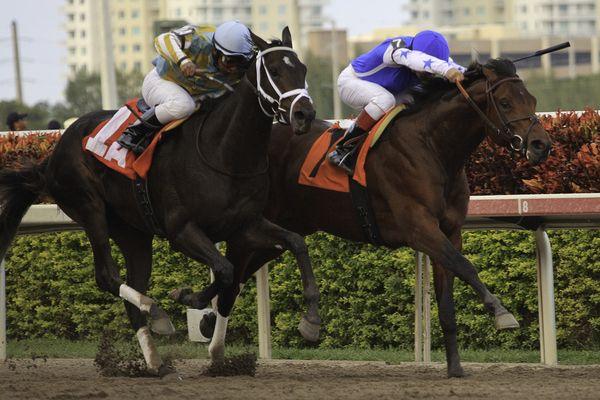 The 2012 Triple Crown is in the record books, but Saturday at Belmont Park seven 3-year-olds hoping to make a splash in the division this summer and fall will line up for the 95th running of the Grade 2, $200,000 Dwyer.

Heading the field is Teeth of the Dog, who won the $100,000 Easy Goer overnight stakes at the Dwyer distance of 1 1/16 miles on the Belmont Stakes undercard a few short hours before his stablemate, Union Rags, closed out the spring classics with a rousing victory over Paynter.

A son of Bluegrass Cat, Teeth of the Dog made a brief appearance in the Triple Crown himself, finishing fifth in the Preakness following his third behind Gemologist and Alpha in the Grade 1 Resorts World Casino New York City Wood Memorial at Aqueduct Racetrack. Owned by J. W. Singer and named for a famed golf course in the Dominican Republic, Teeth of the Dog broke his maiden in his third start at Gulfstream Park in February.

Newly arrived Joel Rosario will have the mount on Teeth of the Dog, who drew post position 6 as the 5-2 morning-line favorite under high weight of 121 pounds.

New York-bred Zetterholm, who finished fourth in the Preakness, 3 ¼ lengths ahead of Teeth of the Dog, remains in open company for the Dwyer. Trained by Rick Dutrow, Jr., the Silver Train colt won three straight against fellow state-breds at Aqueduct Racetrack over the winter prior to the Preakness, including a 2 ¼-length triumph in the Patsyprospect on April 6.

Junior Alvarado rides Zetterholm, the co-second choice on the morning line at 3-1 and second high weight under 118 pounds, from post position 5.

Unstoppable U won both his starts prior to the 1 ½-mile Belmont, in which he finished sixth in his first stakes start and first start around two turns. Trained by Ken McPeek for Susan McPeek and breeder Mojallali Stables, Inc., the gray Exchange Rate colt emerged from the race in fine form, said assistant Lars Becdelamotte, and signaled his readiness for the Dwyer with a sharp five-furlong breeze in 1:00.03 on Sunday.

“Hopefully he runs like we know he can,” said Becdelamotte. “We think he’s a horse that is capable running in a race like the Travers. He has to show us he’s the horse we think he is in this race. He doesn’t have to win, but he’s got to be right there at the wire.”

Javier Castellano will be in the irons for Unstoppable U, co-second choice at 3-1 on the morning line, from post position 4.

Making his Belmont Park debut Saturday is Morgan’s Guerrilla, most recently runner-up in an optional claimer at Churchill Downs on May 31. The Ghostzapper colt, trained by Michael Maker, also has a maiden victory at Aqueduct and a second-place finish in the Grade 3 Illinois Derby on his resume, with his only off-the-board showing an 11th in the Grade 3 Lexington over the artificial surface at Keeneland on April 21.

Ramon Dominguez will ride Morgan’s Guerrilla, 4-1 on the morning line, from the rail.

Returning from the Easy Goer along with Teeth of the Dog is Fast Falcon, who came from last to finish second, beaten 3 ¾ lengths, at odds of 27-1. Off the board in his first two starts, the Awesome Again colt scored his maiden victory at Pimlico on May 11 going 1 1/16 miles.

“I know the distance will suit him, but we’ll have to see about the competition,” said Fast Falcon’s Hall of Fame trainer, Nick Zito. “It’s a big step up for him. We took a chance in the Easy Goer and finished second, and we’re taking a chance here. It’s a small field, but competitive. We’ll see how he handles these and see if he fits.”

Rosie Napravnik will be aboard Fast Falcon, who drew post position 2 and was listed at 10-1 on the morning line.

Rounding out the field are Monarchic, who broke his maiden on turf at Churchill Downs on May 4 and subsequently won an allowance on Presque Isle Downs’ artificial surface, and Guyana Star Dweej, last of 11 in the Belmont.