Teen Pauline looks to keep it rolling in the Top Flight 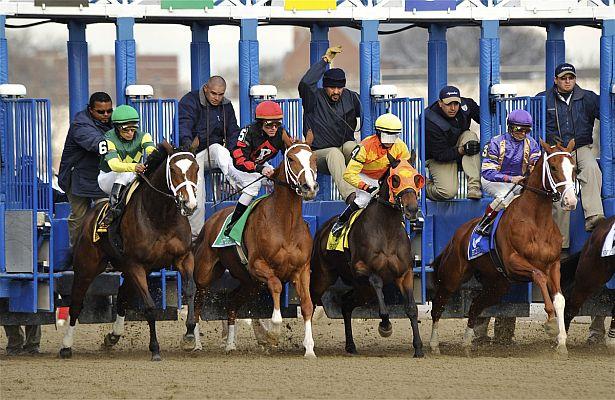 Inner-track revelation Teen Pauline will go in search of her first graded stakes victory and third straight stakes win when she faces a small but salty field of fillies and mares on Saturday at Aqueduct Racetrack in the Grade 2, $200,000 Top Flight Handicap at 1 1/16 miles.

The daughter of Tapit began her career in unusual fashion for a filly that has blossomed into a confirmed router at the age of 4 by setting a track record for five furlongs at Saratoga Race Course as a 2-year-old. She returned later that meet as the 3-5 favorite in the Grade 1 Spinaway, but tired to finish third in the seven-furlong race.

She came back the following year on June 5 at Belmont Park in the hands of Todd Pletcher, having previously been trained by Steve Asmussen, in a six-furlong jaunt restricted to 3-year-olds. Again sent off as the heavy favorite, the speedy filly could not sustain her run in the stretch and faded to fourth, beaten three lengths. Following another disappointing sprint effort, Pletcher, who trains the filly for Stonestreet Stables, moved her to turf and stretched her out to a mile on August 11 at Saratoga in an entry-level allowance race.

She responded well to the change in surface and distance, winning by a length, but perhaps more importantly, displayed an ability to ration her speed. After running admirably in a pair of stakes on the grass - finishing second in the Riskaverse at Saratoga and third in the Pebbles at Belmont, both at a mile - the filly was given another opportunity to prove herself on dirt in the Grade 3, 1 1/8-mile Comely at Aqueduct. Off third that day, the dark bay filly tracked the early pace in fourth, but proved no match for the Darley tandem of Wedding Toast and Toasting in the stretch.

Dynamics changed in her next start, however, when Irad Ortiz, Jr. got aboard for the first time on New Year's Day at Aqueduct in the Affectionately. Rather than sit off the speed, as she had done every race since being stretched out to two turns, Ortiz decided to take advantage of the small, speed-barren field and send her straight to the lead. His mount responded with a career-best effort, winning by 4 ¾ lengths, with a 95 Beyer Speed Figure that eclipsed the 92 she earned for her record-setting debut. The newly turned 4-year-old filly followed that performance with a smashing encore in the Ladies Handicap on January 25 at the Big A, a wire-to-wire romp by 10 ¾ lengths with Ortiz in the irons once again.

Ortiz has the mount on Teen Pauline, the 9-5 morning line second choice, and the pair will break from post position 2.

Pletcher will also send out Royal Lahaina, winner of the Grade 2 Go for Wand on November 29 at Aqueduct. More recently, the 6-year-old mare finished third in the Affectionately and fifth in the Ladies.

"She's had some gate issues in both of her last two starts," said Hughes. "We've brought her to the gate a couple times since so hopefully she's over it."

Royal Lahaina will break from post position 6 with Corey Nakatani aboard and sits at 6-1 on the morning line.

Summer Applause will be making her 2014 debut in the Top Flight, a race she won last year in her first start with trainer Chad Brown. Her 2013 campaign also included wins in the Grade 3 DuPont Distaff at Pimlico and the Lady's Secret at Monmouth, a second-place showing in the Grade 1 Spinster at Keeneland, and concluded with a late-closing fourth in the Breeders' Cup Filly and Mare Sprint.

"She won the race last year," said Brown, "and we thought it would be a good race to start her back. Then we'll just see where to go from there."

Owned by Gillian Campbell and Greenwood Lodge, the daughter of Harlan's Holiday drew post position 4 and will be ridden by Jose Ortiz. She is the 8-5 favorite on the morning line.

The hard-knocking Darley-owned mare Centring will again seek her elusive first graded stakes victory in the Top Flight. Trained by Tom Albertrani, the 6-year-old daughter of A.P. Indy finished third in three Grade 1 stakes in 2013: the Personal Ensign at Saratoga, and the Ogden Phipps and Beldame at Belmont. She finished second in the Affectionately and third in the Ladies Handicap behind Teen Pauline to kick off her 2014 season.

Centring will break from post position 3 with Rajiv Maragh in the irons and rests at 5-1 on the morning line.

Completing the field are Flash Forward, most recently second in the Ladies Handicap, and Flores Island, winner of a second-level optional claimer in her last start.