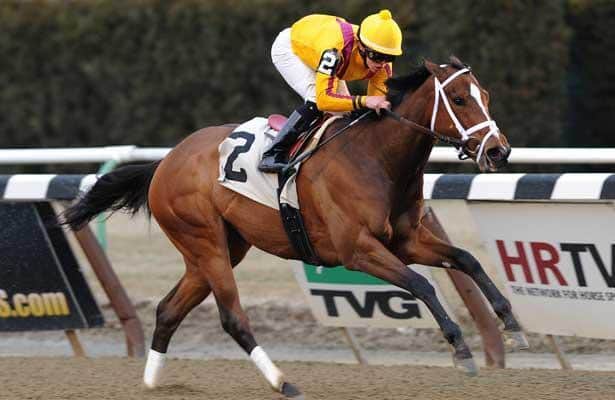 Teen Pauline remained perfect on the inner track with another front-running score, this time in the Grade 2, $200,000 Top Flight Handicap on Saturday at Aqueduct Racetrack.

The 4-year-old daughter of Tapit stumbled a bit coming out of the gate, but quickly gathered herself and assumed her customary position on the lead. After setting fractions of 25.11 seconds for the opening quarter-mile and 49.45 for the half, jockey Irad Ortiz, Jr. gave the speedy filly a little more rein, to which she responded by opening up a three-length lead at the top of the stretch. While under only minor encouragement for the remainder of the race, she was able to maintain her advantage throughout the stretch, winning by 2 ½ lengths over the late-closing Centring.

"She broke a little slow today; she usually breaks in front," said Ortiz. "But she was keen and got the lead easy. I never sent her. I know she has speed and she was in front all the way easily. When I asked her, she took off."

The win gave the dark bay or brown filly - trained by Todd Pletcher for Stonestreet Stables - her first graded stakes win, and boosted her career bankroll to $461,300.

"She didn't break as sharp," said Byron Hughes, assistant to Pletcher, "but once she got the lead, her ears perked up, she took a strong hold of Irad [Ortiz], and I thought we were safe."

The Top Flight was Ortiz's fourth win on the card, including a score in the Grade 3 Tom Fool.

Runner-up Centring, owned by Darley Stable and trained by Tom Albertrani, rallied late to finish a nose in front of Flash Forward to run her graded-stakes-placed tally to six, though she has yet to find the winner's circle in a graded event.

"She closed with a lot of steam," said Albertrani, "but can't seem to crack that win in graded company. I don't know for how much longer she'll be training before we retire her. Again, a good effort."

Royal Lahaina and Flores Island completed the order of finish.

9-for-9 Baaeed is part of Breeders’ Cup qualifying races at York
Want to watch elite racehorses in action this week...