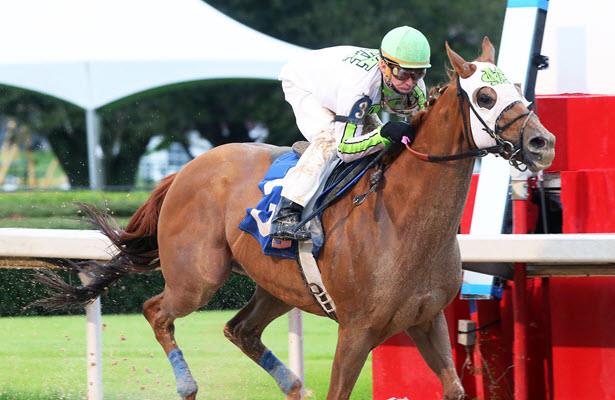 Owner Carson McCord, 20, collected her first career stakes victory in Saturday’s $100,000 Nodouble Breeders’ at Oaklawn Park with favored K J’s Nobility ($5.60), who rolled to a three-length victory in the six-furlong race for Arkansas-breds under Hall of Fame jockey Calvin Borel.

“I’m so happy,” McCord said moments after leading her prized 6-year-old gelding into the winner’s circle. “I can breathe now.”

McCord graduated from nearby Lake Hamilton High School in 2018 and is a sophomore at Chapman University in suburban Los Angeles, with an eye toward becoming a hedge fund manager. She is majoring in business administration.

McCord said because Chapman has moved all classes online until the end of the spring semester because of the coronavirus pandemic, she is able her to watch her horses run in person. But even in a perfect world, McCord said, she still would have been in Hot Springs for Saturday’s race.

“I already had my plane ticket booked,” said McCord, who started her first horse as a teenager in the summer of 2018. “I was planning on being here. I wouldn’t have missed this for the world.”

Saturday’s victory moved McCord to 5 for 8 at the meeting and into a tie for eighth in the owner’s standings. McCord’s handful of horses on the grounds are with trainer Cecil Borel, 66, Calvin Borel’s older brother.

Cecil Borel came out of a lengthy retirement at the 2019 Oaklawn meeting and recorded his first victory in more than 4 ½ years with K J’s Nobility in an Arkansas-bred starter-allowance sprint last April. K J’s Nobility nearly gave McCord her first career stakes victory less than a month later when he finished second, beaten a half-length by Hoonani Road, in Oaklawn’s inaugural $200,000 Arkansas Breeders’ Championship at 1 1/16 miles.

McCord said her hook to Thoroughbred racing was through her father, Bill McCord, who bred and owned horses before going into the stock business in the 1990s. She said Borel had a business relationship with her father during the 1980s. In addition to Cecil and Calvin, another important member of Team Borel is Renay, the jockey’s wife and assistant trainer.

“You can’t beat them,” Carson McCord said. “You really can’t. I couldn’t ask for a better trainer and a better jockey. Calvin is there in the morning wrapping the horses. He knows the horse better than anyone. They’re family. Horses are family. It’s perfect.”

Flatoutandfoxy represented the first career training victory for Renay Borel Nov. 6 at Churchill Downs. She had taken over Cecil Borel’s small stable last fall after he briefly stepped away from the game. Futile, Renay Borel’s first career starter, was claimed out of a Feb. 7 victory for $16,000, but recently rejoined Cecil Borel’s stable after being privately purchased by McCord. Futile is entered in Thursday’s seventh race.

Borel said Thursday morning that he planned to stretch out K J’s Nobility in his next start, with the major spring objective the $165,000 Arkansas Breeders’ Championship for state-breds at 1 1/16 miles May 1.

“If Cecil would have had him a little longer, we would have won that race last year,” McCord said.