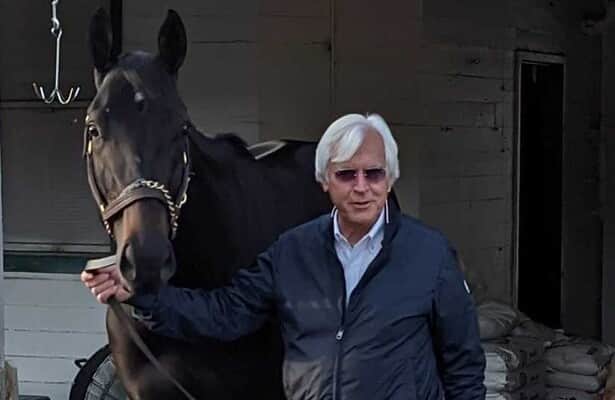 The hearing with Kentucky racing stewards Monday morning will not be in person but, instead, on Zoom. Yet Bob Baffert will not be at home in California. And his Oklahoma-based lawyer will not be at his office in Tulsa.

The Hall of Fame trainer will fly to Kentucky and join attorney Clark Brewster in Lexington, where they hope to succeed in their fight to confirm the late Medina Spirit’s victory last year in the Kentucky Derby.

“That’s where their offices are,” Brewster told Horse Racing Nation by phone on Thursday afternoon. “They’re at the racing commission.”

Brewster confirmed the date and 10:30 a.m. EST starting time of the meeting that will not be open to the public or the media. He said as much first to the Lexington Herald-Leader.

An after-hours email from HRN to a KHRC spokeswoman Thursday asking for confirmation of the meeting had yet to be answered before hours Friday. If there is a response, the usual course of action is to say whether a meeting happens, but further details normally will not be forthcoming.

Brewster said the meeting, which was postponed at his behest because of a schedule conflict this week, really is happening and that testimony and exhibits will be presented. Just not in a public forum.

The reluctance of the KHRC to have stewards carry out their business in the open never was more evident than May 2019, when Maximum Security’s victory was voided because of a foul. That was when stewards refused to answer reporters’ questions after they reluctantly showed up in the media center at Churchill Downs to make a statement about the historic disqualification.

Either way, Brewster and fellow attorney Craig Robertson of Kentucky have been firm in their belief that Medina Spirit should be cleared of any medication violation despite a positive, post-race drug test that was revealed by Baffert eight days after the race. All along they have said that because the 21 picograms of betamethasone came from a skin ointment and not an injection, there should be no case.

“When it comes to corticosteroid regulation in every racing jurisdiction, particularly in Kentucky, they regulate the injectable,” Brewster said. “Everyone just assumed it was injectable. Then, ‘Uh-oh, I guess it wasn’t.’ Now it’s a matter of trying to put the toothpaste back in the tube for those people that jumped the gun. It’s not a rule violation. End of story.”

All along, Churchill Downs has begged to differ. It has maintained the KHRC rules do not color outside the lines of how betamethasone got into Medina Spirit’s system. That and a similar test result with Gamine after the 2020 Kentucky Oaks were the reasons it banned Baffert and his horses from its races and tracks and barns for two years, a punishment that includes the next two runnings of the Kentucky Derby and Oaks.

“Mr. Baffert’s record of testing failures threatens public confidence in Thoroughbred racing and the reputation of the Kentucky Derby,” Churchill Downs CEO Bill Carstanjen said in a written statement last June. “Given these repeated failures over the last year, including the increasingly extraordinary explanations, we firmly believe that asserting our rights to impose these measures is our duty and responsibility.”

Where Churchill Downs quickly stood firm, and where the New York Racing Association tried to do the same, the KHRC has waited more than nine months to weigh in on this matter. Until now. Or at least until Monday.

If Baffert and his legal team are successful in convincing Kentucky stewards to let the Derby result stand, it figures they will demand that Churchill Downs make the two-year ban disappear – and to let Baffert and his horses back into the qualifying process for this year’s Derby.

Brewster stopped short of confirming that next step even as time is running out to qualify for this year’s Derby. The race is seven weeks from Saturday; the last of the major points preps is 29 days away.

“The timeline is somewhat dependent on the regulatory agency giving us the hearing,” he said. “We’ve got the hearing set, and we’ll see what happens there.”

If stewards were to disqualify Medina Spirit and promote runner-up Mandaloun to become the new winner of the 2021 Derby, then Baffert would have up to 10 days to appeal by calling for a review of the case, according to Brewster.

“Typically the way it works is if there’s an adverse ruling by the stewards that impact the purse or the term of suspension, then the commission can order a stay pending the next review in front of an (administrative law judge), and I expect that would probably happen,” Brewster said.

Baffert also is waiting for NYRA to rule on the result of his week-long hearing last month, when he and his lawyers argued to throw out a ban he received as a result of Medina Spirit’s drug positive. The suspension was temporarily set aside last summer when a judge ruled Baffert did not have a fair chance to tell his side to NYRA.

Medina Spirit died Dec. 6, breaking down on the track at Santa Anita moments after a five-furlong workout. Although Robertson first said it probably was the result of a heart attack, the results of a necropsy ordered by the California Horse Racing Board were due to be announced Friday morning, according to a CHRB spokesman.

Zipse: Charge It charges into prominence with Dwyer runaway
As promising as Charge It looked in his first thre...
x