Taylor Made stallion California Chrome to shuttle to Chile 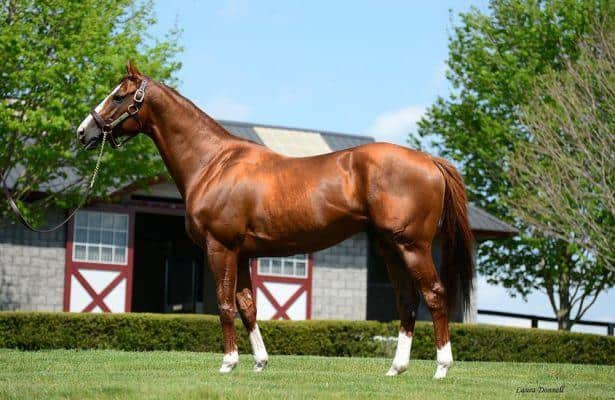 Photo: Laura Donnell
California Chrome will shuttle to Haras Sumaya Stud in Chile for the Southern Hemisphere breeding season, it was announced Thursday. The deal was brokered by Chile’s Sullivan Bloodstock in conjunction with Taylor Made Bloodstock.
“California Chrome has generated a lot of interest from the Southern Hemisphere, so we agreed to explore the option of shuttling. We are very happy to partner with Sumaya Stud, and feel extremely comfortable that it’s a great situation for California Chrome,” said Duncan Taylor, President & CEO of Taylor Made Farm. “This was a decision that was not taken lightly. Ben (Taylor) and I flew down to see several potential farms and did an extensive amount of due diligence, evaluating whether or not there was a situation that met a very high set of standards established by our entire advisory team and our shareholders. Ultimately, the health and safety of California Chrome, quality of facilities, experience of staff and reputation of the farm were all paramount.”
Taylor Made Stallions personnel will accompany California Chrome during his time at Sumaya Stud, and a coordination of protocols have been established by Rood & Riddle’s Dr. Charlie Scoggin & Dr. Rolf Embertson and the two on-location veterinarians at Sumaya Stud, led by Dr. Carolina Rojas.
The newly-retired California Chrome is currently in the second month of his debut season at stud at Taylor Made Stallions in Nicholasville, KY, where he is standing for a fee of $40,000 stands and nurses. This summer after the North American breeding season concludes, plans call for California Chrome to enter quarantine before shipping to Chile.

A two-time Horse of the Year and the world’s richest open-competition racehorse, California Chrome won seven Grade 1 races and $14,752,650 during his illustrious racing career. Among his biggest victories included the Kentucky Derby (G1) and Preakness Stakes (G1) as a 3-year-old, and the Dubai World Cup (G1) and Pacific Classic (G1) in 2016 prior to his retirement. In all, California Chrome won 15 stakes races – including 10 Graded – from 27 starts.