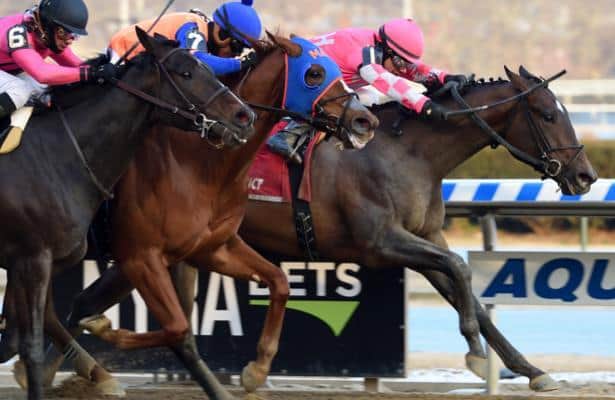 Tax, despite a stumble at the start, recovered to a stalking position, then moved by in deep stretch, emerging a winner of a three-wide duel to take Saturday’s Grade 3, $250,000 Withers Stakes at Aqueduct.

Trained by Danny Gargan, with Junior Alvarado in the irons, the co-2-1 favorite finished a head in front of pace-setting New York-bred Not That Brady. Our Braintrust, a newcomer to the Mark Casse barn, ran a close third with Sir Winston fourth in the field of seven.

"I had to help him get into a good position," Alvarado said. "It wasn't going as smooth as I wanted it to, but he's such a nice horse that he overcame all that."

Tax entered with prior experience on the 2019 Kentucky Derby trail having finished third at the same 1 1/8-mile distance in the Dec. 1 Remsen. This time, he won going nine furlongs in 1:50.27, collecting 10 points toward a spot in the starting gate on the first Saturday in May.

Gargan, who claimed Tax out of his second start, said the colt "got a really good education" running in tight down the back stretch, adding his horse may have clipped heels more than once.

"Junior said he got in a ton of trouble," Gargan said. "You can't really tell it because you're not riding the horse. He said he should have won by three or four lengths. I'm happy with the fact that he learned and got in there, got an education, because we're going to get in bigger fields."

Alvarado and his mount recovered after Tax nearly fell leaving the gate, using his horse a bit to establish the lead into the turn. Not That Brady flew four-wide to go by and set the pace, clicking off fractions of 23.56, 47.39 and 1:11.44 before surrounded with 1/16th of a mile to go.

Tax ran up the rail and Our Braintrust flew down the center of the track, splitting Note That Brady. Casse lodged an objection against Not That Brady due to contact in deep stretch, but stewards dismissed it, as it seemed Tax's move played a part in a drift outward.