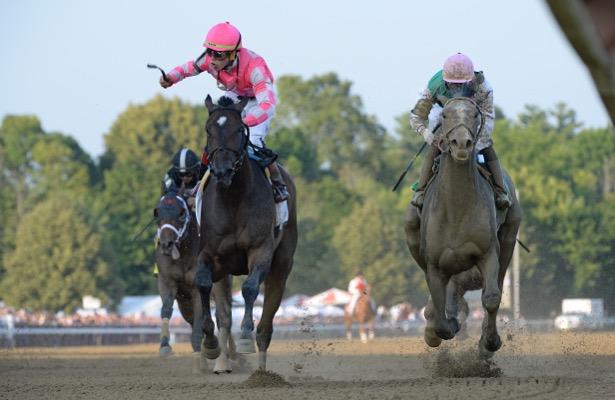 Regardless of who ultimately ships in for the Aug. 24 Travers Stakes (G1), the local favorites were decided Saturday when Tax outlasted a late charge from Tacitus to win the Grade 2, $600,000 Jim Dandy at Saratoga.

The Arch gelding Tax moved by War of Will in the far turn. He rationed just enough to score by 3/4 of a length over favorite Tacitus, who went to his knees when left at the starting gate in the 1 1/8-mile race.

“You come to Saratoga and that’s what you dream about – the Jim Dandy on the way to the Travers,” co-owner Randy Hill said. “Dreams come true, and he reminded us today.”

A former claimer trained by Danny Gargan, Tax entered with a Grade 3 win at the distance in Aqueduct’s Withers.

Gargan said he expected four lengths of improvement since Tax began working in glued-on shoes toward the end of the Triple Crown series.

Tax took over Saturday to complete the mile in 1:36.59 before hitting the wire in 1:49.28 under jockey Irad Ortiz Jr., who got the return call Saturday.

A partnership of R.A. Hill Stable, Reeves Thoroughbred Racing, Hugh Lynch and Corms Racing Stable campaigns Tax, who Gargan claimed last year for $50,000 out of a maiden victory at Keeneland.

New connections immediately moved up Tax for a third in Aqueduct's Remsen (G2) before he prevailed in a 3-year-old debut in the Withers, ran second to Tacitus in the Wood Memorial (G2) and was placed 14th in a muddy running of the Kentucky Derby.

Off a fourth in the Belmont Stakes, Tax entered the Jim Dandy as a 9-2 shot in the Jim Dandy field of six. He returned $11 to win.

“It makes the little guys think they’ve got a chance,” Hill said of the former claimer’s Jim Dandy score. “You know how much money’s in this game and how much money is spent?

“Well, (we) just proved that a couple of smaller guys can get it done.”

Behind Tacitus, Global Campaign was third and Laughing Fox fourth. Preakness Stakes hero War of Will faded to fifth after setting the early fractions, missing the board for the fourth time in his last five starts.

"No excuses," War of Will trainer Mark Casse said. "He broke good. He kind of ran off down the backside, but still, no excuses.

"He's tired, but I didn't think he needed much. He had a great trip. I don't think you could have asked for it any better. He got out-run today."

Tacitus, the 8-5 post-time favorite, was runner-up to Tax after finishing ahead of him in the Wood Memorial, Kentucky Derby and Belmont Stakes.

Stewards raised an inquiry to examine Tacitus' troubled start, then allowed the result to stand.

Tacitus jockey Jose Ortiz said he wanted to be "very aggressive" Saturday and challenge the early speed, but that the start ruined those plans.

"I think the stumble cost me a lot, for sure," said Ortiz, who ran second to his brother.