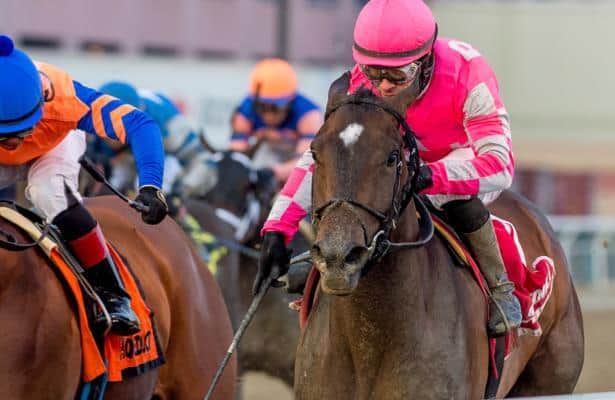 Tax, a big bay gelding who returned from a six-month layoff to impressively win the Harlan’s Holiday (G3) Dec. 12, gets his second shot at Pegasus glory Saturday when he lines up with 11 others for the $3 million Pegasus World Cup Championship Invitational (G1).

Owned by R.A. Hill Stable, Reeves Thoroughbred Racing and Hugh Lynch and trained by Danny Gargan, Tax was claimed out of his second race for $50,000 in October of 2018. The son of Arch has since won three graded races and nearly $1 million.

After stumbling at the start of last year’s Pegasus and finishing ninth, Tax was off for six months after a fifth-place finish in the Oaklawn Handicap (G2). Gargan said the plan originally was to run at Keeneland in the fall and then the Breeders’ Cup, but a temperature kept the colt away from the races until his victory in the Harlan’s Holiday.

“We decided not to rush him into the Breeders Cup,” Gargan said in an interview released by Gulfstream Park. “Brought him down to Florida, got him acclimated and was pointing for the Pegasus and using the Harlan’s Holiday as a prep and he showed up and ran a big race.”

Gargan said for the gelding, who stumbled out of the gate in last year’s edition of the Pegasus, getting out cleanly will be a key to success.

“He’s such a big horse when he’s in the gate, he takes the whole gate up,” Gargan said. “You have to stand him, get him used to it. He gets in there and kind of rattles it sometimes. He’s not really so much bad as he just gets uncomfortable, he’s so big he’s touching both ends of it, but he’s gotten used to it more.”

Tax is a newly minted 5-year-old, and Gargan said he aims to keep him running for at least the next  couple years.

“He’s a gelding, we want to keep him around for longer,” Gargan said. “Race him through his 5 and 6-year-old career. Maybe even seven if he stays good like he is now.”