Tampa Bay Downs: Bocachica is Jockey of the Month 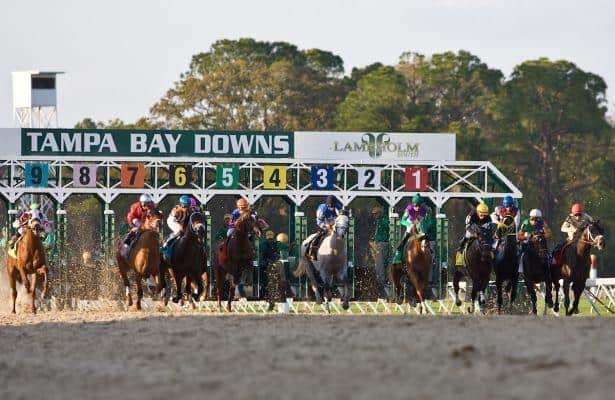 A conditional allowance race for horses 4-years-old-and-upward and a starter/$40,000 optional claiming event for 3-year-olds, both scheduled for the turf course, headline an 11-race card Saturday at Tampa Bay Downs.

The Oldsmar oval will also simulcast the Grade II, $900,000 Rebel Stakes from Oaklawn Park, a “Road to the Kentucky Derby” prep race in which the Bob Baffert-trained colt American Anthem is the 2-1 morning-line favorite in a field of 11.

Saturday’s sixth race, to be contested at a distance of a mile-and-a-sixteenth, has drawn a field of 10, headed by 7-2 morning-line favorite Red Zone. The 5-year-old gelding, who finished second in the same condition on Feb. 25, is trained by Bernell Rhone and will be ridden by Dean Butler.

Perhaps the most intriguing entry in the race is 5-year-old gelding Tether to Reality, who is a half-brother to last year’s Breeders’ Cup Mile winner on the Santa Anita turf, (now)-6-year-old Tourist. Tether to Reality (by Harlan’s Holiday out of Unbridled Melody, by Unbridled’s Song) won his career debut here on Jan. 6 in impressive fashion going six furlongs on the dirt, and his backers hope he has inherited his ancestors’ turf proclivity.

Victor Lebron will again be aboard for trainer Joan Scott.

The eighth race on Saturday, at a distance of one mile, attracted an overflow field of 11 sophomores, with 10 permitted to face the starter. The 5-2 morning-line favorite is Speed Game, a homebred gelding racing for Charles Lo.

Speed Game, who won in the same condition here on Feb. 3, had to settle for fourth on Feb. 22 against a somewhat higher caliber of competition, but could bounce back to the winner’s circle Saturday for trainer Tom Proctor and jockey Ronnie Allen, Jr.

The second morning-line choice at 7-2 is the gelding Nice Not Nice, trained by William “Buff” Bradley and to be ridden by Jesus Castanon. Now 2-for-7 in his career, Nice Not Nice finished second by a neck here in the same condition on Dec. 16 and is making his first start since.

Bocachica earns Jockey of Month honor. The first person Orlando Bocachica thanked after learning of his selection as the Hampton Inn & Suites Jockey of the Month was his father, who died at home in the Miami area Wednesday morning of a heart attack. Orlando Bocachica Lugo, who was employed as an assistant to Gulfstream Park trainer Antonio Cioffi, was 55.

“He taught me all the basics – how to sit on a horse, how to use my legs, how to get in position in a race,” Bocachica said today in the Tampa Bay Downs jockeys’ room. “He showed me how to read the form the day before a race.

“He was the best in the world, to me. He taught me everything.”

Bocachica’s younger brother, Arnaldo, rides at Hollywood Casino at Charles Town Races in West Virginia, where he is in fourth place in the standings.

After traveling to south Florida on Wednesday, the 35-year-old Bocachica returned to Tampa Bay Downs to ride one horse today, finishing third on Team Blanchard in the fourth race on the turf for trainer Mike Dini. Bocachica plans to ride today andSunday, then travel to Ponce, Puerto Rico, where the funeral will be held next week.

Bocachica said he intends to honor his father’s memory by continuing to put forth his utmost effort on the track and as a father. He has two sons: Alnaldo, 13, and Orlando Rudolph, 5. “I have to keep my head up and keep strong for them and for my mother,” he said.

Anyone who has known Orlando Bocachica for most of his career, like trainer John Rigattieri, is confident he will continue to strive to reach his full potential. “I’ve known him for 15 years, and I used him a lot at Suffolk Downs and in Maryland,” Rigattieri said.

“He is a strong, talented rider who has a lot of ability on a horse, and he gives you 110 percent every race.” Four of Bocachica’s eight victories since Feb. 22 have been on Rigattieri-trained horses.

Bocachica is in seventh place in the Oldsmar standings with 25 victories. He also won the Jan. 24 Ocala Breeders’ Sales Championship Stakes (Fillies Division) on the Dini-trained Dynatail; the duo finished fourth here on March 11 in the Grade III, $200,000 Florida Oaks on the turf.

Bocachica has won four graded stakes races, most notably the Grade I Gulfstream Park Turf Handicap in 2014 aboard 4-year-old gelding Lochte, a 39-1 shot that day.

Agent Steve Worsley, who also represents Jose Ferrer, became friends with Bocachica at Monmouth Park, where Worsley also worked as an agent. After watching Bocachica finish in the top six in the Monmouth standings each of the last three years, he offered to handle his bookings at Tampa Bay Downs.

Despite a so-so start to the 2016-2017 meeting, both were confident better days were just around the corner. “As soon as trainers saw what he was capable of, the response was nothing but positive,” Worsley said. “Orlando has a knack for putting horses in the right spot to give them the best opportunity to perform to their utmost.

“I’m very lucky to have two talented riders. My main job is to not mess them up,” Worsley said.

Morales added the fourth race on the turf on Trismen, a 4-year-old gelding owned by Paul K. Girdner and trained by Dennis Ward.

In the 10th race on the turf, Ward sent out his second winner of the day,

3-year-old filly U Know That Rite, who is owned by Ward’s Ridenjac Racing outfit. Shannon Uske was the jockey.

The final Kids and Family Days celebration of the 2016-2017 meeting will be held Sunday from 11 a.m.-3 p.m. in the Backyard Picnic Area. Admission is free. Youngsters can enjoy games, pony rides and bounce houses, as well as the opportunity to meet the track mascot, Mouse the Miniature Horse.