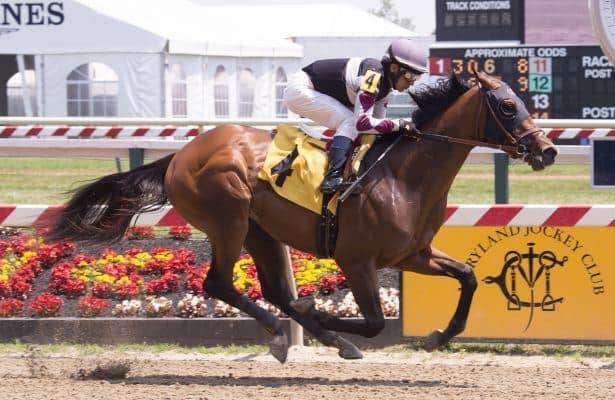 The six-furlong Bashford Manor is the first of three stakes events on a deep 11-race nighttime card billed as “Downs After Dark Presented by Stella Artois and Jack Daniel’s.” Admission gates open Saturday at 5 p.m. (all times Eastern), the first race is 6 p.m. and the “Downs After Dark” theme is “My Country ’Tis of Thee” in which guests are encouraged dress in their finest red, white and blue to celebrate the Fourth of July holiday weekend and enjoy draft beer, specialty cocktails, BBQ, food trucks, “Bet or No Bet Presented by Thorntons” and live music by local country band Wildwood.

Because it’s closing night, there is a mandatory payout in Churchill Downs’ 20-cent minimum Single 6 Jackpot, which began the week with a $671,761 carryover. Since May 13, the daily six-race sequence has challenged bettors to select the winners of six consecutive races but the Jackpot pool only is paid if there is a single winning ticket. When multiple tickets contain six winners – which has been the case for each of the last 28 race days – 90 percent of that day’s pool is paid out and 10 percent is added to the Jackpot carryover. Takeout on the Single 6 Jackpot is just 15 percent, which is one of the lowest multi-race wager takeout rates in American racing.

Saturday night’s Single 6 Jackpot, including any added money in the carryover, will be paid to ticket holders with the most winners in the six-race series, which covers Races 4-9 starting at approximately 7:26 p.m.

Recruiting Ready is certain to be included on numerous Single 6 Jackpot tickets.

Based in Maryland, Recruiting Ready won his May 28 debut at Pimlico with overwhelming authority as the odds-on 3-5 favorite under Hall of Fame jockey Edgar Prado. The 2-year-old son of freshman sire Algorithms sizzled along the inside through an opening quarter-mile in :22.39, opened up after a half-mile in :45.52 and crossed the finish line in :51.78 for 4 ½ furlongs, which was just .28 off champion Countess Diana’s 1997 track record of :51.50.

Horacio DePaz trains the promising colt for Sagamore Farm’s Kevin Plank, the founder and CEO of Under Armour who purchased Recruiting Ready for $110,000 at Keeneland’s September yearling sale. Recruiting Ready was bred in Kentucky by legendary Claiborne Farm.

Recruiting Ready is comfortably drawn on the outside for the Bashford Manor and will ridden again by Prado, who flies in for the mount.

First run in 1902, the Bashford Manor is named for the former Louisville Thoroughbred breeding and racing farm that dominated the American racing scene in the early 1900s. George J. Long, a wealthy foundry owner, purchased Bashford Manor Farm in 1887 and developed his Thoroughbred operation that provided him two Derby wins as an owner, 1892 (Azra) and 1906 (Sir Huon), and three as a breeder, 1892 (Azra), 1899 (Manuel) and 1906 (Sir Huon). In addition, Bashford Manor also won the Kentucky Oaks in 1894 (Selika) and 1915 (Kathleen). The original Wilder family owned Bashford Manor. The Wilders were direct descendants of Lord Baltimore, whose English home was also called Bashford Manor. Long died in 1930 and the farm was eventually sold in 1973 to make way for the development of a mall complex, fittingly named Bashford Manor, that formally closed in 2003.

General admission to Churchill Downs is $10 on Saturday night. Box seats are $25 and reserved dining packages are $70. They can be purchased online at www.ChurchillDowns.com/Tickets.

Trainer Steve Asmussen will start Winchell Thoroughbreds’ homebred Tricky One in Saturday’s 116th running of the $100,000 Debutante (Listed) in an attempt to collect his fifth victory in the six-furlong sprint for 2-year-old fillies.

The Debutante, which attracted 10 juvenile fillies, is one of three stakes events on Churchill Downs’ 11-race closing night card billed as “Downs After Dark Presented by Stella Artois and Jack Daniel’s.” The Debutante will go as Race 8 at 9:39 p.m. (all times Eastern).

Tricky One, a Kentucky-bred daughter of Unbridled’s Song out of the Pulpit mare Simplify, contested the pace from the inside in her June 3 debut and shook clear in the stretch to draw away for a comfortable 4 ½-length win in :58.19 for five furlongs.

One of Tricky One’s prime rivals will be a horse bred by Asmussen’s father Keith. Keene Thoroughbreds’ Country Candy was a romping 9 ½-length debut winner at Lone Star Park for trainer J.R. Caldwell on May 6. Bred in Texas, Country Candy will attempt to become the third Texas-bred to win the Debutante in the last four years. Bret Calhoun saddled Fiftyshadesofgold and Promise Me Silver to victories in 2013-14, respectively.