Taking a Stand: Against the favorite in the Woodbine Mile 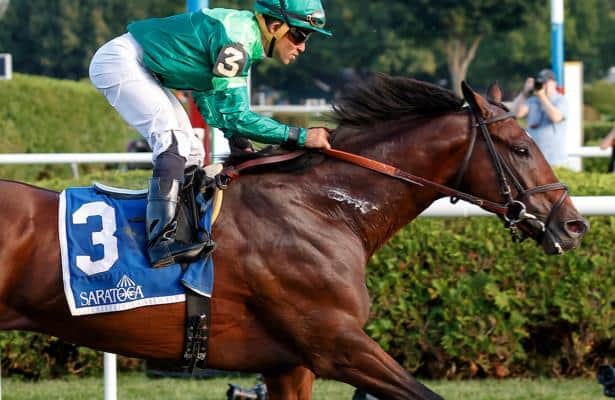 Welcome to Taking a Stand. In this weekly column, I will be identifying a horse who is likely to be heavily bet whom I believe is a vulnerable favorite. Many horseplayers are far too quick to use a weak favorite defensively while playing not to lose. However, some of the biggest scores can come as a result of taking an aggressive stance against a horse the public will back heavily. This column is not for the faint of heart, but tremendous opportunities abound for those steely-eyed souls willing to play against the masses.   Taking a stand against: Raging Bull in the Woodbine Mile

With Kentucky Downs closing the book on another successful meet, the turf racing action heats up north of the border this weekend at Woodbine. The Grade 1 Woodbine Mile is set for Race 10 on Saturday and headlines a spectacular card of racing. This week, we are taking a stand against No. 7 Raging Bull (2-1).

Raging Bull displayed loads of talent and upside as a 3-year-old, and he was thought to be the next Chad Brown superstar. However, after starting his career with five wins from seven starts, he has only recorded two wins from his next thirteen races. While he has certainly not embarrassed himself, he does feel like a horse who failed to continue to mature and develop beyond his 3-year-old campaign.

Looking at Raging Bull’s 2021 season, he appears to be a horse who is heading the wrong direction in his form cycle. After starting the year with a blistering win in the Maker's Mark Mile (G1) at Keeneland, he was beaten as the heavy favorite in the Poker Stakes (G3) at Belmont Park.

While he had some minor traffic issues to navigate, that was not a very strong field, making it tough to excuse the effort at the short price. It was extra disappointing when you consider he failed to hold off the late charge of the sprinter mare Oleksandra, who missed the break and spotted the field a handful of lengths early.

Bettors are a forgiving sort, however, and once again backed Raging Bull to even money in the Fourstardave Handicap (G1) at Saratoga. With absolutely no excuses, Raging Bull was completely flat, running an even sixth as the heavy favorite once again. After posting an impressive 106 Beyer in his Keeneland win to start the year, he has regressed in each of his next two starts, posting Beyers of 103 and 98. This should not come as a big surprise, as it is exactly what he did last year after starting 2020 with an impressive victory at Santa Anita before regressing in his subsequent starts. Raging Bull may just be a horse who needs significant time off in between starts, and with only four weeks rest from his last race, all signs indicate he is unlikely to show up with his best effort.  Alternative options

With Raging Bull likely to attract ample support due to past success and the high profile connections of Chad Brown and Frankie Dettori, there are a number of interesting alternates who may go off as significant overlays. No. 5 Set Piece (5-2) is a logical second choice in this event. He finished second in the Fourstardave, about two lengths ahead of Raging Bull, but he was never a threat to the winner Got Stormy.

The form of that race was not exactly flattered when the first and third place finishers Got Stormy and Casa Creed came back to run fifth and sixth next out in a Turf Sprint (G3) at Kentucky Downs. The rider upgrade to Joel Rosario might make all the difference here, as there is no one better at timing their runs on these deep closers.  While I respect Set Piece, I’m inclined to go another direction. No. 10 Space Traveller (12-1) is one of two European invaders here, although he did make his last start locally in the Mister D. Stakes (G1) at Arlington. He was in tight early in that race and shuffled back to last, where he got a little bit rank while racing inside of horses. From that point onwards, he really never had a chance when trying to close into an absolutely glacial pace set by a loose leader.

However, Space Traveller ran on admirably, passing four horses despite the slow pace and running his final two furlongs in an incredible 22.67 seconds. He recorded an impressive 123 TimeformUS speed figure for that effort, which is faster than anyone else’s last out race. Campaigned primarily as a miler for most of his career, the cutback here makes plenty of sense as the stretch out to ten furlongs last out was likely a little too far. Furthermore, he’s had most of his success overseas when racing around left-handed courses that are more galloping in character, such as Leopardstown and York. Woodbine is most similar to the courses where he has had success, and at the generous odds of 12-1 he must be used. Other contenders include the Mark Casse trained trio of No. 2 Olympic Runner (10-1), No. 3 March to the Arch (8-1), and No. 4 Ride a Comet (5-1). Of those, I prefer Ride a Comet, as he is an uncanny four for four lifetime at Woodbine with two wins over the all-weather track and two wins over the turf.

March to the Arch likely needs a little longer than the one-turn mile he gets today, and Olympic Runner seems destined for a minor award at best. No. 1 Town Cruise (20-1) appears to be lone speed in this event on paper, depending on what tactics Colby Hernandez decides to employ on No. 8 Change of Control. However, since 2017 only 6 percent of races held at one mile on the EP Taylor turf have been won on the lead, and Town Cruise was unable to hold off Olympic Runner last out in the local prep. While I don’t think Town Cruise can win this race, he is certainly a big player to round out the bottom of the exotics at a huge price. Circling back to the favorite, Raging Bull does not seem a very probable winner and will almost certainly be overbet. In his current form, it is quite reasonable that he fails to hit the exacta as well.

I will be taking a stand against Raging Bull, leaving him out of the exacta completely. Space Traveller is a win bet at anything near his morning line odds, and I will be keying him with Set Piece, Ride a Comet, and Town Cruise in exactas.