Taking a Stand: 1 BC favorite stands out ... as a bet-against 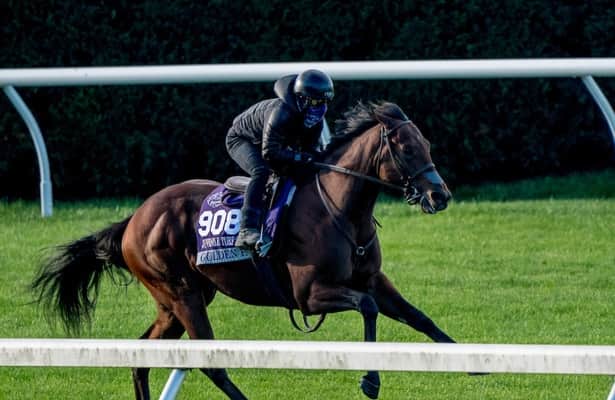 There is one clear-cut favorite on Breeders’ Cup Saturday who I know I will be taking a stand against: Golden Pal in the Turf Sprint.

Golden Pal has carried extremely lofty expectations for most of his career. He ran a brilliant race as a 2-year-old at Royal Ascot, and he is undefeated stateside over the turf. Purely looking at his record, he is an intimidating horse. However, there are a few reasons why I believe he may be a vulnerable favorite next Saturday.

First, it is important to consider the quality of competition when viewing his overall record. Three of his four wins have come in age-restricted races to either 2-year-olds or 3-year-olds. While he did beat older horses last out in the Woodford (G2), he was not meeting a very strong field that day.

In his one race against legitimate Grade 1 foes in the Nunthorpe Stakes (G1), Golden Pal ran extremely poorly, finishing seventh and beaten nearly five lengths. It is difficult to find an excuse for him in that race as he has previously shipped overseas and handled good ground. It is likely that he just ran into a field full of better horses than him that day.

Get Proven Breeders' Cup Analysis for all 14 BC races >>

Looking over the rest of Golden Pal’s résumé, one has to wonder who is the best horse that Golden Pal has beaten recently. Although his 2-year-old form was excellent, it feels as if he has been finding some very soft spots lately. Beating horses such as Extravagant Kid, who was making his first start after shipping back from Europe, and Jaxon Traveler, a dirt horse, is quite a bit easier than the test he will face in this race.

Perhaps more important than who Golden Pal has beaten are the speed figures he has earned in those victories. To put it mildly, he is barely fast enough to be a contender much less to be a favorite.

Beyer Speed Figures in the Daily Racing Form are even more critical of Golden Pal’s last race, giving him a paltry figure of 88, the third slowest last-out figure in the entire field.

Some folks may argue his slower speed figures can be excused because he is lightly raced and should improve with experience. While I do respect that opinion, I am also somewhat skeptical that Golden Pal is going to continue to get better. Wesley Ward is arguably the best trainer in the country at getting juvenile horses to run fast early, but more often than not those horses do not go on to significantly improve with age and experience.

Golden Pal is unquestionably a talented racehorse, but he has taken advantage of soft fields in his wins, and he has not run a fast enough race to warrant favoritism. Given the strength of this field, I will be against Golden Pal in all pools.

There are a number of highly intriguing horses in this race, and I hesitate to get too invested in any particular horse until we know for sure who ends up running in this race and get to see Monday’s post draw. I was initially skeptical that Lieutenant Dan would be able to tackle open company after spending most of his career running against California breds, but he has been nothing short of spectacular since returning from the layoff. He will get a stiff class test here, but he is in career form and might be this good.

Gear Jockey is another who enters this race in excellent form, coming off of a career-best effort at Kentucky Downs, which has been an excellent angle for producing next-out winners. Fast Boat would need to work out a trip and need some help up front, but he is another who could take this race on his day.

Of the Europeans, I am most interested in Emaraaty Ana. His last two races are most likely the strongest races of anyone in this field, beating very talented sprinters in Starman and Dragon Symbol. He is also proven to handle firm going, which is a key uncertainty for many of the other European shippers. His stablemate Glass Slippers appears to have lost a step this year and would be a mild surprise to win.

A Case of You ran a huge figure last out, but I am a little dubious of that race given the absolutely dreadful condition of the turf that day at Longchamp. He has never run on faster ground than good, and I am unsure how much he will take to the firm, California turf at Del Mar.

Golden Pal is likely to be bet as if he is a standout when in reality he is only a fringe contender against this field. I will leave him off of my multi-race bets and let him beat me. I am most interested in using Emaraaty Ana, Lieutenant Dan, and Gear Jockey, but I will wait until fields are finalized and posts are drawn to construct a wager.

We successfully took a stand against Tamahere in the Noble Damsel Stakes (G3). Tamahere was unable to secure the lead, lacked any finishing ability at all over the firm turf course and faded to a distant 6th place finish.

In this weekly column I will be identifying vulnerable favorites and evaluating alternate horses to use in key weekend stakes races. Many horseplayers are far too quick to use a weak favorite defensively while playing not to lose. However, some of the biggest scores can come as a result of taking an aggressive stance against a horse the public will heavily support. This column is not for the faint of heart, but tremendous opportunities abound for those steely eyed souls willing to play against the masses.