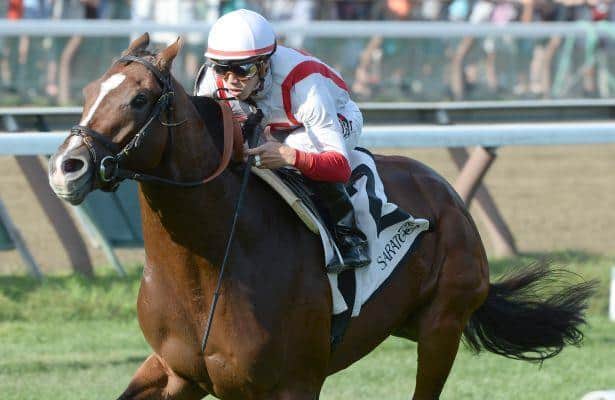 As one of two runners for owners Klaravich Stables and William Lawrence and one of four for trainer Chad Brown, Takeover Target emerged from the shadows of his more accomplished stablemates to pick up his first stakes win with a half-length score in the Grade 2, $200,000 National Museum of Racing Hall of Fame on Friday at Saratoga Race Course.

Taking advantage of Takeover Target's inside post position, Irad Ortiz Jr. guided the Harlan's Holiday colt along the rail, tracking an early pace set by Sailthehighseas, who led the field through the opening quarter-mile in 24.12 seconds and the half in 49.13. Ortiz tipped Takeover Target out nearing the eighth pole and rallied on the outside to overtake A Lot, who had assumed the lead at the top of the stretch.

"I broke out of there and got a good position, which is what I wanted to do," Ortiz said. "I saved all the ground I could and on the last turn I looked to my right and didn't see anybody, and this horse likes to get clear in the stretch. I got out and he took off."

Takeover Target was 2-for-2 before joining the stakes ranks this spring, first with a second-place finish to Divisidero in the Pennine Ridge. His connections aimed higher for his next race, resulting in a fifth-place finish in the Grade 1 Belmont Derby on July 4.

"It just wasn't quite his trip in the Belmont Derby going a mile and quarter," said Brown. "We got a nice cutback in distance today and a little class relief back into a Grade 2 and it did the trick for this horse. He only had one start as a 2-year-old and now he finally seems to be maturing, and Irad knows the horse well."

A Lot, one of two entrants for Hall of Fame trainer Bill Mott, finished second, a half-length ahead of stablemate Courtier, while World Approval was another 1 ¼ lengths back in fourth.

Takeover Target boosts his lifetime stats to three wins and a second from five starts and earnings of $301,200.