Take Charge Indy Hopes to Skip Away at Gulfstream 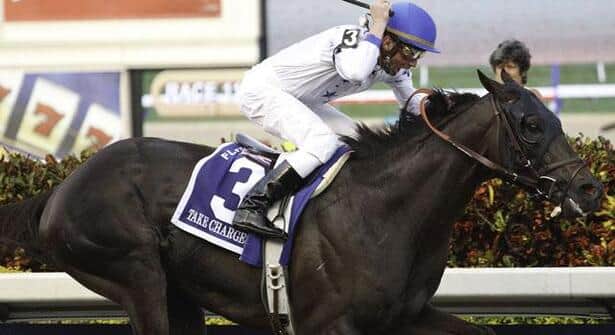 Trained by Pat Byrne, Take Charge Indy left seven other 3-year-olds in his wake, including favored Union Rags, on his way to a dramatic one-length victory to earn a spot in the Kentucky Derby (G1). One year later, Take Charge Indy will return to Gulfstream on Derby Day as one of the favorites in the $100,000 Skip Away (G3).

"It's a pretty salty race for a Grade III, but we're ready to go," Byrne said. "He blew out (Sunday) in :36 and change and everything looks good.

"Certainly, it will be special running on (Derby Day)," he added. "It (Florida Derby) was a great win for us. In fact, I enjoyed that win maybe most of all my wins because it was for really nice people and it was a special day, but we expected him to run well in there."

Echoed co-owner Chuck Sandford: "As far as the excitement of last year, it was a lot of fun. That's the easiest way to put it. We enjoyed the repercussions and it got us to the Kentucky Derby at Churchill. Things didn't go quite as well as we wanted to there, but overall it was just a fantastic experience.

Byrne, who trained 1997 Horse of the Year Favorite Trick and won the 1998 Breeders' Cup Classic (G1) with Awesome Again, is expecting another good performance from Take Charge Indy in the Skip Away. After undergoing surgery to remove a bone chip in his left front ankle after finishing unplaced in the Kentucky Derby and missing more than five months, Take Charge Indy has returned to finish third Oct. 12 in the Fayette (G2), second Nov. 23 in the Clark Handicap (G1) and was third in his 4-year-old debut at Gulfstream Feb. 9 in the Donn Handicap (G1).

"I thought he ran well in the Donn," said Byrne. "We had to use him a little bit, but (winner) Graydar got out on the front and (second-place finisher) Bourbon Courage is a really good horse."

Byrne said Take Charge Indy, owned by WinStar Farm and Chuck and Maribeth Sandford, is a versatile horse with enough speed to go to the front or rate off a fast pace.

Pants On Fire returns to Gulfstream after winning an optional allowance race here easily Feb. 15 by 5 1/4 lengths. The son of Jump Start, winner of the 2011 Louisiana Derby (G2), has won two of three starts at Gulfstream and finished third in the Hal's Hope (G3) Jan. 13.

"It would be nice to have two Skip Away's under our belt," said trainer Kelly Breen, whose 5-year-old won the ungraded Skip Away Stakes at Monmouth last year. "He's one-for-one this year so we're going to try and keep him going, knocking off a couple wins and pick and choose our spots to get him back to a higher graded race. We'll knock away with the Grade III's right now. If he runs good we'll see if he can step up.

"He's doing fantastic down here. He loves Gulfstream and likes training in Florida. He won down here last year as well as this year. I wouldn't be upset if all his races were at Gulfstream."

Golden Ticket, who finished in a dead-heat in the Travers last August with Alpha, will vie for favoritism with Take Charge Indy. The son of Speightstown followed up his Travers victory with a third-place finish Sept. 22 in the Pennsylvania Derby (G2) and an 11th-place finish Nov. 25 in the Hollywood Derby (G1). Golden Ticket made his 4-year-old debut a good one Jan. 26 at Gulfstream by winning an allowance race by 5 1/4 lengths before shipping to Louisiana and finishing third Feb. 23 in the Mineshaft Handicap (G3).

Cigar Street, a 4-year-old son of Street Sense who earned a 99 Beyer Speed Figure when breaking his maiden in his second career start last winter at Fair Grounds, finished fourth in the Louisiana Derby (G2) before being forced to the sidelines for nine months with a hairline fracture. The colt returned to the races at Gulfstream Dec. 27 with an impressive victory over Fast Falcon then followed that up with another strong performance Feb. 17.

"We’re looking forward to watching him run and hopefully he can come out a winner as well," said Lewis of the Skip Away recently.

Others entered in the Skip Away include Where's The Baby, Flatter This, Gourmet Dinner and Al Qasr.