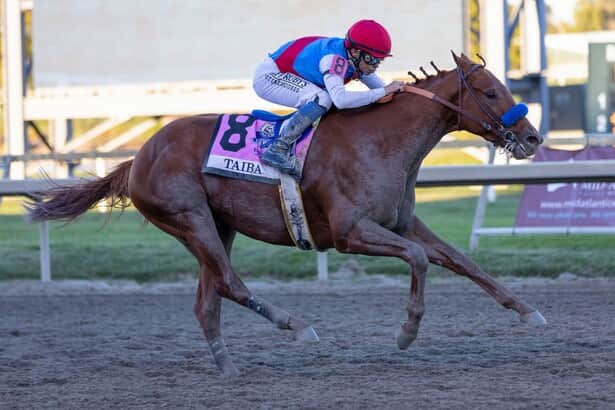 A late entry came into the mix for the best 3-year-old colt in the land.

It arrived on an early fall Saturday, at the conclusion of the 41st running of the Grade 1, $1 million Pennsylvania Derby at Parx Racing. And it came from the rapidly developing Taiba, a strapping chestnut colt who turned the Pennsylvania Derby into a coming-out party.

Zedan Racing Stables Inc.’s son of Gun Runner ran over his 10 opponents in the 1 1/8-mile Pennsylvania Derby, winning the signature event of the Keystone State’s racing season by 3 three lengths over Jeff Drown’s Zandon. Taiba, the 7-5 favorite, won his second Grade 1 race in just his fifth career start, all of them this year.

“He proved today that he is a good horse,” Hall of Fame trainer Bob Baffert said by phone from his home in California. “He ran his race. He is a horse that has been slowly improving.”

Going into the Pennsylvania Derby, the leader in the 3-year-old division was widely regarded to be Travers (G1) winner Epicenter, who also finished second in the Kentucky Derby and Preakness Stakes.

Now Taiba’s resume includes wins in the Pennsylvania Derby as well as the Grade 1 Santa Anita Derby. He was a head away from a third when he lost the Haskell Stakes at Monmouth Park in his prior start.

“This was a spot that puts him right there,” Baffert said. “He is just a tough horse. Powerful.”

“This is kind of what we expected,” said Gary Young, the bloodstock agent for winning owner Amr Zedan. “We always said this horse has a lot of room for improvement. We think he will be even better next year, and he is pretty damn good this year.”

Ridden by Hall of Famer Mike Smith, Taiba showed a powerful turn of foot nearing the stretch in the Penn Derby. After being inside in the early portions of the race, a spot Baffert said the colt doesn’t like, Smith got him outside,and his mount responded.

Zandon, trained by Chad Brown and ridden by Joel Rosario, rallied behind Taiba to finish second but was no match for the winner.

Florida Derby (G1) winner White Abarrio, trained by Saffie Joseph Jr. and ridden by Luis Saez, set the early pace in the race. He completed the first quarter in 23.27 seconds, the half in 47.21 seconds and six furlongs in 1:11.06.

Taiba took over when Smith tipped him out – “I was in the rumble seat,” Smith said – and the race was over.

“I was a little worried when he was down on the inside, because he doesn’t like being on the inside,” Baffert said. “When he tipped out, he just took off.”

Cyberknife, who had finished second in the Travers following his Haskell win, was third, 3 3/4 lengths behind Zandon. He was never a factor.

“No excuses,” Brad Cox, Cyberknife’s trainer, said. “When they broke, they got away from him a little bit. He was maybe a little further back than we expected. (Jockey Florent Geroux) had to move him early to get into position, and obviously, the winner was kind of gone at that point. He ran on. I just wish he was running on in front.”

Baffert said the next start for Taiba will be the Breeders’ Cup Classic on Nov. 5 at Keeneland, where he will meet the likes to Flightline and perhaps Life Is Good, a horse Baffert used to train.

“You know, horse racing changes day by day,” Baffert said. “I’m not looking forward to running against Life Is Good and Flightline. Those are two very fast horses.”

After Cyberknife, the order of finish was Simplification, White Abarrio, B Dawk, Naval Aviator, We the People, Skippylongstocking, Tawny Port and Icy Storm.