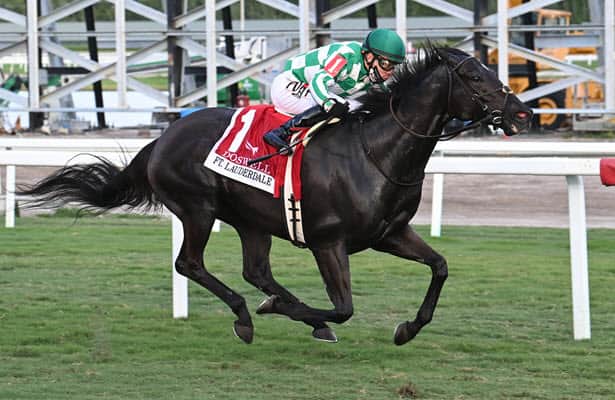 All observed talent, but also a bad actor with troublesome feet. That is never a good combination.

Joseph Allen, Doswell’s octogenarian breeder and owner, finally turned to trainer Barclay Tagg and his assistant, Robin Smullen. They offered a smaller operation that allows them time to give extra attention to, shall we say, particularly needy horses. They have a reputation for managing head cases, with gelded 2003 Kentucky Derby and Preakness Stakes winner Funny Cide foremost among them.

After going winless in three seasons before he joined Tagg’s hands-on operation, Doswell finally produced his first victory in the summer of 2020 to begin an ascent that places him among the contenders in the Grade 1, $1 million Pegasus World Cup Turf Invitational on Jan. 29 at Gulfstream Park.

“The way he’s been training lately and the way he did his last workout,” Tagg said, “I wouldn’t trade him.”

Normally, Tagg carefully chooses his words and conceals his excitement, understanding how much can go wrong before and during a race. He cannot conceal his enthusiasm in this instance, appreciating how far Doswell has come under their care.

The 7-year-old gelded son of Giant’s Causeway responded beautifully to jockey Junior Alvarado’s every need when he rolled gate-to-wire in the Dec. 18 Fort Lauderdale Stakes (G2) at Gulfstream for his first graded-stakes score. He continued to impress by working seven furlongs on the turf in 1:22.95 on Jan. 16 at Palm Meadows Training Center in Boynton Beach, Fla.

Doswell was a project that Tagg eagerly undertook.

“There was nothing not to like about him except he was a bit of a head case,” he said. “Once we got that straightened out, we could see some raw talent there and he just got better with his races.”

Tagg is the first to say that nothing could have been accomplished without Smullen, who also brought the head-strong Funny Cide to hand.

“She’s got the heart of a lion, the judgment of Solomon and the patience of Job,” Tagg said.

Doswell would do a jittery jig to and from the track when he trained each morning. Leave it to the rest of the crowd to walk normally. When he galloped, he was intent on lugging out, tugging on Smullen all the way. In a fairly short time, the two of them sorted it out.

“If a horse can have a favorite person, I’m his favorite person because he doesn’t gallop as well for anyone else as he gallops for me,” Smullen said. “Not too many people get on him except for me, unless they breeze.”

Entering the starting gate used to be Doswell’s worst nightmare – and therefore his handler’s.

“He was really bad at the gate,” Smullen recalled. “He tried to lay down. He did lay down a couple of times, right down to the ground.”

The New York gate crew, fearing for Smullen’s safety, yelled at her to get off, fearing a sudden action by Doswell that might be catastrophic.

They made nine visits to the starting gate to allay Doswell’s fears.

After nearly flipping in the paddock, the gelding overcame the unenviable rail position when he made a winning first start on the front end for his new barn Aug. 8, 2020. The effort was encouraging, but far from perfect. Jockey Jose Ortiz reported that the horse attempted to lug out throughout the mile and a sixteenth. With a new bit, a more controlled Doswell produced a second consecutive victory, this one in allowance company Oct. 2 at Belmont Park.

He went on to place second in the Fort Lauderdale in his first graded-stakes attempt to close his 5-year-old campaign. He bypassed last year’s Pegasus Turf and ran third in the W.L. McKnight (G3) at Gulfstream.

Doswell’s limited body of work suggests one thing – he can be formidable against most company on his best day. He has hit the board in 11 of 12 lifetime starts with three wins and five runner-up efforts with earnings of $314,621.

The antics are not completely gone and probably never will be.

“He definitely tries to assert himself and it can probably be construed as him being really bad, but I don’t find that,” Smullen said. “He’s anxious. He wants to do his job. He loves to do his job. But other people might not see it that way. I think he was just misunderstood really.”

Doswell still tends to get washed out during the post parade. There is no telling how he might react to a big crowd that is often raucous on Pegasus World Cup Day, having quenched its thirst many times over in the South Florida sun.

Allen appreciates how far his project has come and said of Tagg and Smullen, “They did a terrific job with him. They spent a lot of time with him and got it done.”

Sometimes getting there is a triumph in itself.