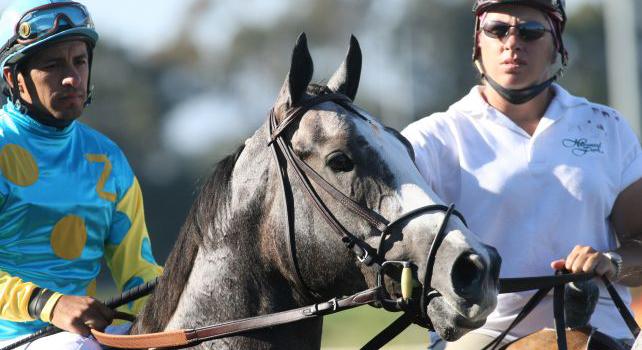 The Bob Baffert trained Zensational rides a four-race win streak including three successive Grade I victories, but the speed of this year's Breeders' Cup Sprint just might do him in.

This year’s Sprint draws 11 pre-entries with the connections of Crown of Thorns and Square Eddie stating first preferences for the Mile and Turf Sprint, respectively.  For now, we can assume they’ll get into their preferred races and not include them in this race analysis.  If that is not the case, we’ll incorporate that change into our final analysis following the post positions draw.

In this projected field of nine horses we find that, from a running style perspective, it is very balanced.  There is no question that Zensational will impatiently pull Victor Espinoza to the early lead with Fatal Bullet in close pursuit.  Just behind these duelers will be the senior statesman of the field, Cost of Freedom; the mighty foreign filly, Fleeting Spirit; and the underrated, Join In The Dance.  The off-the-pace types will be lead by, the very game, Dancing in Silks followed by the seven furlong, dirt specialist, Captain Candyman Can.  Completing the field are the two closers, Gayego and Kodiak Kowboy.  It doesn’t get more balanced than that.

The key to finding the winner of this race rests with determining how fast Zensational and Fatal Bullet will go early.  BRIS pace figures offer us some important clues.  According to BRIS, Fatal Bullet is very capable of posting pace figures of between 98 and 99 at the first call while Zensational is comfortable in the 95 to 97 range at the first call.  Clearly, the three-year old colt will be forced to run the fastest early quarter of his career.

At the second call Fatal Bullet typically peels off pace figures of between 107 and 111.  Zensational’s top second pace number to date is a 107.  What we can conclude then is that Fatal Bullet will push the unrateable Zensational into pace figures of about 99 and 111, respectively (which is actually par for the Sprint, historically).  Even with the assumption that Zensational is better than he was in the summer, he’ll still be forced to run faster than he ever has before against far superior competition.

The wicked duel that is going to emerge will deplete the reserves of both Zensational and Fatal Bullet, a colt that is playing catch up in his training.  If it is a particularly warm day, the Pro-Ride surface will only make it more difficult on Zensational as intimated by Bob Baffert.  Neither one of these colts will win the Sprint.

If we look at the front runners just behind the duelers, Cost of Freedom doesn’t have the internal pace figures to compete plus he appears to be a notch below where he was last year at this time.  Join In The Dance will get burned in the fire unless he is reserved early.   The filly, Fleeting Spirit, looks huge here.  Based just on her BC Turf Sprint effort last year, she is capable of sitting close to hot paces and still having plenty in reserve.  The fact that she is beating huge Group 1 fields of boys makes her an even more attractive proposition.  History is on her side, with fillies and mares doing quite well against the boys in the Sprint.  Plus, she’s even better than she was last year.  Big question is can she run on the Pro-Ride surface.  Look to work outs for clues.

Of the off-the-pace runners, Dancing In Silks looks far superior to Capt. Candyman Can.  The former has a huge home field advantage, is proven at 6 furlongs and ran a new top last out which is a positive Sprint angle and has the preferred stalker running style.  While Capt. Candyman Can is attempting to buck a 25 year trend with no wins at 6 furlongs this year or lifetime. Plus, no horse has won the Sprint coming out of the G3 Phoenix.  Additionally, he appears to be a much better horse on dirt.

Of the closers, Kodiak Kowboy is an easy toss from the top two spots.  According to Asmussen, he has been concerned about how much the last race took out of his charge, the impact the long flight will have and his lack of affinity for synthetics.  The hot speed up front and his closing style could get him a 3rd or, more likely, 4th place finish.

Gayego is the closer to watch.  At the top of the stretch, he’ll still be about 6 lengths back but the late pace figures of 111 he produced in his last two races puts him right there at the finish line.  Plus, he always fires big second off the layoff—a key angle in the Sprint.

So, in the end, this is how I see them finishing: Use the BC Dashboard at HorseRacingNation.com featuring over 100 replays, morning lines and handicapping analysis for all 14 races!