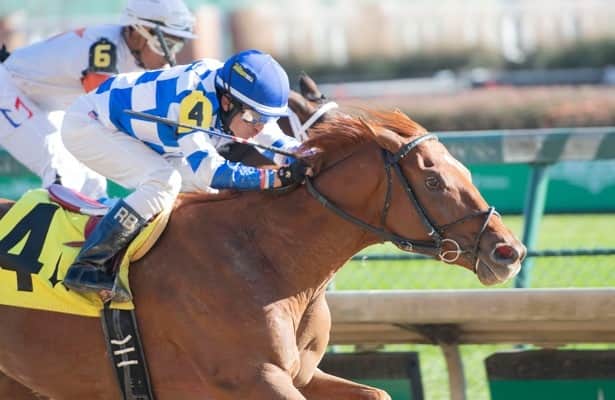 Jim Boeheim, the Hall of Fame basketball coach at Syracuse University, already pulled off an upset this year when he led the Orange to an unexpected trip to the Sweet Sixteen in the NCAA Tournament.

Saturday, he hopes to be part of another shocker, this time in horse racing, something he admits he is not a big fan of. More on that later.

Boeheim will be at Churchill Downs to watch Hidden Stash run in the 147th running of the Kentucky Derby. Not much chance was given to Hidden Stash at Tuesday’s draw when he was one of six Derby horses given morning line odds of 50-1 by Mike Battaglia, the oddsmaker for the Run for the Roses.

The 76-year-old Boeheim doesn’t have a big piece of the chestnut colt, whose latest claim to fame was a fourth-place finish in the Blue Grass (G2) at Keeneland on April 3. The coach’s good friend, Adam Weitsman, gave Boeheim a small portion of his share in the horse, which is owned by a fairly new syndicate, BBN Racing.

Boeheim has history with them. More on that later, too.

“I have a couple of tail feathers,” Boeheim said with a laugh from his office in Syracuse. “Geez, I have as small a piece as you can have.”

That won’t prevent him from bringing his wife, Juli to town for the Derby spectacle. They met for the first time at the Derby in 1994, and this will be the first time Boeheim has been back since.

“You know, it will be fun,” Boeheim said. “We will have some people there. (Churchill) is a great place, and it’s a great event. I wish I was a bigger fan of racing. I am just not a fan of racing. I don’t know why.”

He has been to the races at Saratoga in the summer, which is a quick run across the New York State Thruway.

Boeheim has nothing against racing, he just doesn’t follow it enough. He said there are probably 50 other sports that he would rather watch.

“I think I would rather watch curling,” he said.

His interest will be keen, however, when he congregates with the BBN gang. (In Kentucky, BBN is affectionately known as Big Blue Nation, the fan base for the University of Kentucky athletics programs, especially the basketball and football teams.)

This is the first Derby horse for BBN, which came into existence about three years ago. If Hidden Stash were to win the Derby, it would be one of the biggest upsets in the history of the famous race.

If the horse is going to do some good, watch for him late. His best chance will be with a late run down the famous Churchill stretch.

“I don’t know what would happen if we would win,” Boeheim said. “That would be pretty crazy. Will I bet? Yeah, you got to bet. A small bet. I don’t bet much. Our horse is a long, long, long shot.”

One thing Boeheim surely loves about the BBN group is that two of the founding partners – Brendan O’Brien and Brian Klatsky – have basketball in their DNA.

Klatsky played two years for Skidmore College in Saratoga Springs in the early 1990s. O’Brien, from Troy, which is 30 miles south of Saratoga, was a high school basketball star and was recruited by Boeheim. The 6-foot-8 O’Brien, now 46, remembers when Boeheim came to town to recruit him.

“I was recruited by a ton of schools,” O’Brien said. “I probably met over 100 coaches through the process and he was really the only one who told me the truth. He said, ‘listen, you are not going to play (at Syracuse) for a couple years. If you are happy doing that, you are welcome to come. You are going to sit and you are going to lean and you will probably play the last couple years.’ I was young and stupid and thought I was going to be great.”

Boeheim does remember recruiting O’Brien, who was not offered a scholarship by Syracuse and played at Manhattan College instead.

He also remembers a visit to Troy, but not much more.

“It’s a little cloudy right now, it was a long time ago,” he said. “He could not have been that good because you always remember the great ones, especially the ones you lose. I usually say the first year will be rough. The world has changed now, it’s different.

Now it’s ironic that Boeheim, in a way, is a player – call him a bench player – for the BBN team. And it is coached by O’Brien. There has been no word on whether O’Brien will offer Boeheim a BBN scholarship.

And that is fine with Boeheim, the coach.

“He is doing all the coaching,” Boeheim said. “I am just kind of watching. (BBN) are doing a good job. My friend (Weitsman) has been with them a few years and they have had some success.”

The first horse that BBN got involved with was Concrete Rose, the winner of the 2019 Saratoga Oaks and Belmont Oak. BBN co-owned the filly with Ashbrook Farm.

Now, here comes Hidden Stash with a chance to make history. And Boeheim is more than happy to be along for the ride.