Swiss Skydiver will scratch from Ogden Phipps with fever 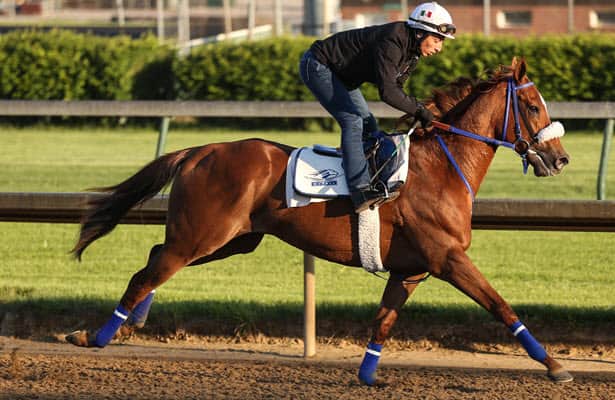 Unfortunately Swiss Skydiver had a 104 fever this morning. We are a scratch. We’ve treated her to knock down the fever and will regroup later in the season. Never easy. pic.twitter.com/B3jJBKcKNX

The filly was set to take on a star-studded field in the Saturday race at Belmont Park, which is set to include Letruska, who beat Swiss Skydiver in both fillies’ most recent trip, the Apple Blossom (G1) at Oaklawn on April 17.

McPeek said in another post that he thought being vanned to New York had stressed the filly. Tex Sutton equine flights are currently not operating due to a contract issue with the company.

Swiss Skydiver, who won last year’s Preakness Stakes, won her other start of 2021, the Beholder Mile.

She was the second entrant to scratch from the Ogden Phipps, joining Valience, who trainer Todd Pletcher announced would scratch on Thursday, due to a similar temperature issue to Swiss Skydiver.

The losses leave the Ogden Phipps with five runners, including Shedaresthedevil, winner of the La Troienne (G1) in her most recent trip and Bonny South, who comes in off a win in the Doubledogdare (G3).

The Ogden Phipps is carded as race 7 on Saturday at Belmont. Post time is scheduled for 3:18 p.m.